Numerous federal programs are working to increase broadband access on tribal lands. However, tribes have struggled to identify which federal program meets their needs, and have had difficulty navigating complex application processes.

Tribal Lands in the United States 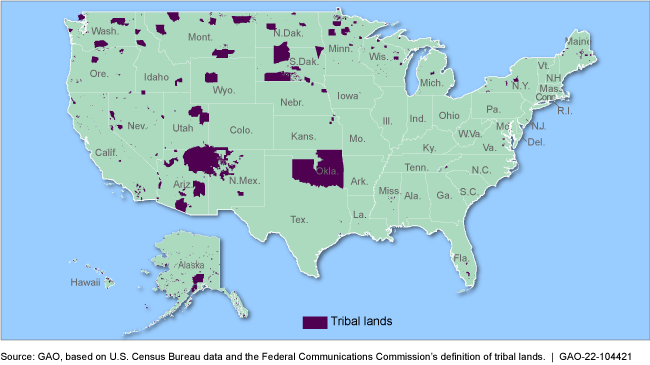 Federal funding from 2015–2020 has increased broadband access for people living on tribal lands, but access continues to lag behind the rest of the country. Nationwide, conservative estimates show more than 18 percent of people living on tribal lands remain unserved by broadband as of 2020, compared to about 4 percent of people in non-tribal areas. For example, in Arizona federal programs have increased broadband access on tribal lands, but that access continues to lag far behind the rest of the state (see figure).

Persistent barriers limit tribes' and providers' ability and interest in participating in federal broadband programs, including fragmentation of federal programs and difficult application requirements. Tribes and providers continue to face challenges identifying programs to suit their needs from the landscape of numerous, but fragmented, federal broadband programs. Furthermore, complex application processes and the need for upfront funds create additional barriers and discourage participation.

The Executive Office of the President took the lead on coordinating federal tribal broadband efforts in 2021, but these efforts are not guided by a national strategy with clear roles, goals, and performance measures. Officials from agencies that implement broadband programs told us that a national strategy led by the Executive Office of the President could improve coordination and the persistent gap in access on tribal lands warrants specific focus. In addition, the primary ongoing broadband coordination body, the American Broadband Initiative (ABI), lacks a framework for addressing tribal barriers that could also support implementing a national strategy. While ABI has formal frameworks that focus on federal funding and permitting in general, ABI members said they do not hold regular discussions about tribal issues. In 2020, the Department of the Interior also identified a need for increased focus within ABI on tribal issues. The Department of Commerce's National Telecommunications and Information Administration (NTIA) is a leader within ABI, and NTIA officials said they intend to use ABI to meet NTIA's statutory requirements related to broadband coordination. Without a national strategy and a framework within ABI to focus tribal efforts, broadband access for people living on tribal lands will continue to lag behind the rest of the country, perpetuating the digital divide.

Broadband is critical to modern life. Despite federal efforts, broadband access on tribal lands has traditionally lagged behind the rest of the country.

GAO is making two recommendations: (1) that the Executive Office of the President should specifically address tribal needs within a national broadband strategy and (2) that the Department of Commerce create a framework within the American Broadband Initiative for addressing tribal issues. The Executive Office of the President did not agree or disagree with our recommendation, but highlighted the importance of tribal engagement in developing a strategy. Commerce agreed in part with our recommendation.