Telework is essential to the continuity of federal operations in emergencies—but it also brings added cybersecurity risks. We examined federal agencies' preparedness to support expanded telework during the COVID-19 pandemic.

We looked at 12 agencies and found that they all had the technology to support remote access for telework. But not all agencies had fully addressed relevant guidance for securing their remote access systems. For instance, four agencies had not fully documented what they planned to do to mitigate weaknesses they had found in their IT security controls.

We made 9 recommendations to 6 agencies that could help. 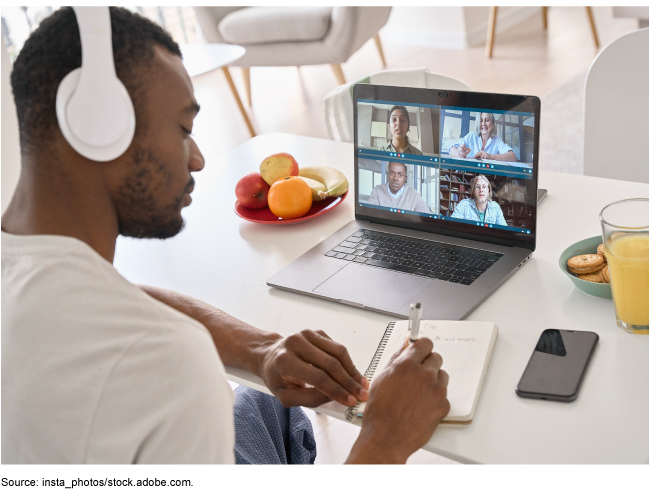 Each of the 12 agencies GAO selected for review had information technology (IT) in place to support remote access for telework during the COVID-19 pandemic. Although the agencies initially experienced IT challenges in supporting remote access for maximum telework, they generally overcame them. For example, seven agencies were challenged in providing sufficient bandwidth to provide remote access for teleworkers, but they increased bandwidth as needed to ensure networks could handle additional remote connections. In addition, while the increased number of remote connections brings additional cybersecurity risks, all of the selected agencies reported that they continued activities intended to help ensure the security of their information and systems.

Although one of the selected agencies subsequently resolved its shortcomings, others had not. For the agencies that did not fully follow federal information security guidance, agency IT security officials stated that these conditions existed for various reasons, such as out-of-date documentation, among others. If agencies do not sufficiently document relevant security controls, assess the controls, and fully document remedial actions for weaknesses identified in security controls, they are at increased risk that vulnerabilities in their systems that provide remote access could be exploited.

In response to the onset of the COVID-19 pandemic, in March 2020 the Office of Management and Budget directed federal agencies to maximize their use of telework to enable the workforce to remain safe while ensuring that government operations continue. Telework is essential to continuity of operations but also brings added cybersecurity risks.

The CARES Act contains a provision for GAO to monitor the federal response to the pandemic. GAO was also asked to examine federal agencies' preparedness to support expanded telework. GAO's objectives were to determine (1) selected agencies' initial experiences in providing the IT needed to support remote access for maximum telework and (2) the extent to which selected agencies followed federal information security guidance for their IT systems that provide remote access.

GAO selected 12 agencies for review that varied in their percentages of reported employee telework use and sent a questionnaire to solicit these agencies' perspectives on the use of IT in transitioning to maximum telework. GAO also reviewed the selected agencies' information security documentation and interviewed relevant officials.

GAO is making a total of nine recommendations to six agencies to document and assess relevant controls, and to fully document remedial actions for systems supporting remote access. The agencies agreed with the recommendations.