The National Oceanic and Atmospheric Administration has made substantial progress in the last 5 years to prevent and respond to sexual assault and harassment within its workplaces.

Although NOAA has followed many Equal Employment Opportunity Commission "promising practices," we found some shortcomings in the agency's prevention and response processes. For example, NOAA's 2020 mandatory training for supervisors and managers didn't explain the consequences supervisors and managers could face if they failed to report incidents that they witnessed or that were reported to them.

Our 6 recommendations to NOAA address this and other related issues. 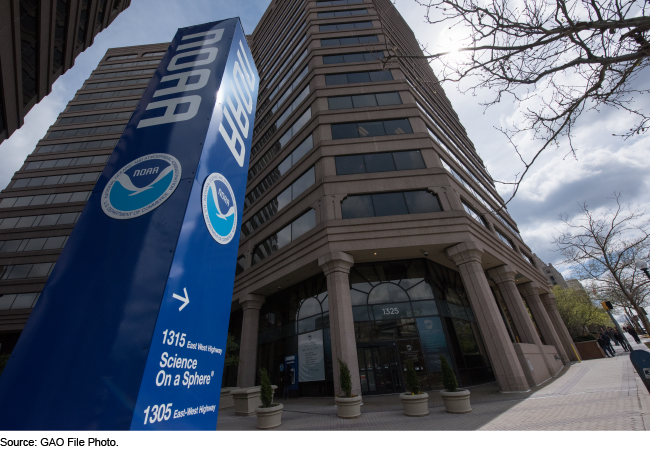 The National Defense Authorization Act for Fiscal Year 2017 (2017 NDAA) required the National Oceanic and Atmospheric Administration (NOAA) to develop a policy for preventing and responding to sexual assault and sexual harassment of NOAA's workforce. In response to the 2017 NDAA, NOAA issued its Sexual Assault and Sexual Harassment Prevention and Response Policy in February 2018. GAO found that this 2018 policy is consistent with most of the relevant legal requirements from the 2017 NDAA and is partially or not consistent with some. For example, although NOAA has protocols for investigating allegations of sexual assault and sexual harassment, NOAA's policy does not specifically describe these protocols, as required by the 2017 NDAA. In addition, the policy follows most selected practices recommended by the Equal Employment Opportunity Commission (EEOC) in its 2017 Promising Practices for Preventing Harassment document.

While NOAA's actions followed many selected EEOC promising practices, GAO found some shortcomings in the agency's prevention and response processes. For example, NOAA's 2020 mandatory training for supervisors and managers did not explain the consequences for failing to fulfill the reporting responsibilities related to allegations of harassment—in contrast to EEOC's promising practices. Specifically, the training did not describe the consequences managers could face if, for example, they failed to report incidents that they witnessed or that were reported to them. In the absence of training or other mechanisms to clearly outline consequences for failing to fulfill managers' responsibilities, agency managers may allow harassing behavior to continue, thereby raising liability concerns and undermining the message that sexual harassment is not tolerated.

In addition, EEOC's promising practices state that those implementing an agency's complaint system should appropriately document every complaint. The offices responsible for implementing each of NOAA's complaint systems do not maintain or collect data in a consistent manner and have not always provided data to management in a consistent format. Consequently, the agency has experienced difficulty reconciling data from its multiple complaint systems for annual reports to Congress and is hindered in its ability to target prevention and response efforts, according to agency officials.

Sexual assault and sexual harassment can have harmful effects on the individual employees as well as the workplace by undermining employee morale and decreasing productivity. In 2018, NOAA identified several factors indicating that the agency may be at risk for harassment or assault, or both.

GAO was asked to review NOAA's policies and actions for preventing and responding to sexual assault and sexual harassment. This report examines: (1) the extent to which NOAA's policy is consistent with relevant legal requirements in the 2017 NDAA and follows EEOC's promising practices and (2) the extent to which NOAA's actions follow EEOC's promising practices.

GAO is making six recommendations, including that NOAA ensure future updates to agency policy are consistent with all relevant legal requirements in the 2017 NDAA and that NOAA address shortcomings in following EEOC's promising practices, such as requiring supervisor training to identify consequences for failing to fulfill supervisory responsibilities and consistently documenting complaints. The Department of Commerce and NOAA concurred with the recommendations.