DOD plans to acquire nearly 2,500 F-35 aircraft for about $400 billion. It projects spending another $1.27 trillion to operate and sustain them—an estimate that has steadily increased since 2012.

The military services collectively face tens of billions of dollars in sustainment costs that they project will be unaffordable. For example, the Air Force needs to reduce estimated annual per-plane costs by $3.7 million (47%) by 2036, or costs in that year alone will be $4.4 billion more than it can afford. 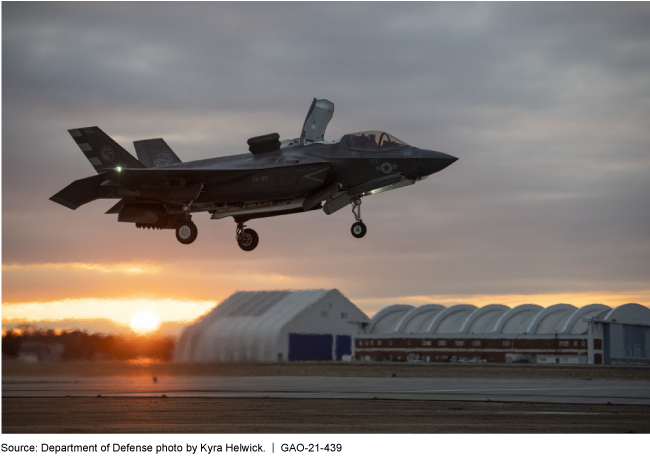 Note: Costs are in constant year 2012 dollars, as that was the year when the F-35 program was most recently re-baselined.

The Air Force needs to reduce estimated costs per tail per year by $3.7 million (or 47 percent) by 2036 or it will incur $4.4 billion in costs beyond what it currently projects it could afford in that year alone. Cost reductions become increasingly difficult as the program grows and matures. However, GAO found that there is no agreed upon approach to achieve the constraints. The F-35 program estimates that it will declare Milestone C—a decision point for moving into full-rate production of the aircraft—sometime in the 2021-2023 time frame. Without assessing cost-reduction efforts and program requirements (such as number of planned aircraft), and developing a plan prior to declaring Milestone C, the Department of Defense (DOD) may continue to invest resources in a program it ultimately cannot afford. Congress's requiring DOD to report on its progress in achieving affordability constraints and making F-35 procurements contingent on DOD's demonstrated progress would enhance DOD's accountability for taking the necessary and appropriate actions to afford sustaining the F-35 fleet.

The F-35 aircraft, with its advanced capabilities, represents a growing portion of DOD's tactical aviation fleet—with about 400 of the aircraft fielded. DOD plans to procure nearly 2,500 F-35s at an estimated life cycle costs of the program exceeding $1.7 trillion—with $1.3 trillion of those costs being associated with operating and sustaining the aircraft.

A House Report accompanying the National Defense Authorization Act for Fiscal Year 2020 included a provision for GAO to review F-35 sustainment efforts. This report, among other things, assesses the extent to which (1) the F-35 has met warfighter-required mission capable rates; and (2) DOD has reduced the F-35's estimated life cycle sustainment costs and made progress in meeting its affordability constraints. GAO reviewed program documentation, analyzed performance and cost data, collected data from F-35 locations, and interviewed officials.

Congress should consider (1) requiring DOD to report annually on progress in achieving the affordability constraints, and (2) making F-35 aircraft procurement decisions contingent on DOD's progress in achieving these constraints. GAO is making four recommendations to DOD, including assessing cost reduction efforts and F-35 program requirements, and developing a plan to afford to sustain the future F-35 fleet. DOD partially concurred stating it will work to meet the intent of the recommendations in an expeditious manner. GAO continues to believe DOD should address the recommendations prior to declaring Milestone C.

The much anticipated Top Gun: Maverick (the sequel to the 1980s hit Top Gun) arrived in theaters...
Blog Post