Many colleges and other institutions of higher education across the country closed their physical campuses in response to COVID-19. The Coronavirus Aid, Relief, and Economic Security (CARES) Act created a relief fund, a portion of which was slated for emergency financial assistance to students.

We reviewed the fund and found:

As of Nov. 2020, the Department of Education had awarded $6.19 billion to 4,778 schools that applied for emergency student aid funds

By fall 2020, schools had distributed about 85% of these funds to students

The average amount per student was about $830

The majority of student aid funds went to public schools 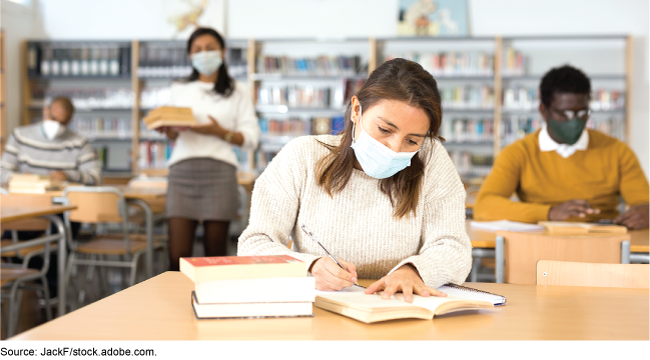 As of November 2020, the Department of Education (Education) had distributed $6.19 billion in grants to 4,778 schools (colleges and other institutions of higher education) that had applied for emergency student aid funds from the Higher Education Emergency Relief Fund (HEERF) established by the CARES Act, which was enacted in March 2020. After many schools closed their physical campuses in spring 2020 in response to COVID-19, Education provided these grants to schools, based on a statutory formula, to give emergency financial assistance (student aid) to students who incurred related expenses, such as for housing, technology, and course materials. The majority of these HEERF student aid funds have been awarded to public schools (see figure). The average amount Education awarded per school was about $1.3 million, while amounts schools received ranged from less than $2,000 to more than $27 million, with half of schools receiving awards of $422,000 or less. Education data show that, as of November 2020, schools had drawn down about 90 percent—or $5.6 billion—of their HEERF student aid funds. About 70 percent of schools had drawn down all of their student aid funds, and an additional 24 percent of schools had drawn down at least half.

Schools used a variety of approaches to determine student eligibility and distribute funds to students. According to GAO’s analysis of a sample of school websites and data from Education, schools had distributed approximately 85 percent of all emergency student aid funds by fall 2020, with an average amount per student of about $830.

In June 2020, GAO issued the first of a series of reports on federal efforts to address the pandemic, which included a discussion of HEERF student aid grants to schools. At that time, limited information on how schools distributed HEERF funds to students was available. This report provides additional information and examines (1) how HEERF emergency student aid funds were provided to schools under the CARES Act, and (2) how schools distributed emergency student aid to eligible students.

GAO analyzed Education’s obligation data as of November 2020, after Education had obligated most of the HEERF emergency student aid funds. GAO also analyzed information about HEERF student aid that Education requires schools to report on their websites by selecting a generalizable random sample of 203 schools for website reviews. These schools were representative of the more than 4,500 schools that received HEERF student aid funds as of August 2020. GAO also collected non-generalizable narrative details about how schools distributed funds to eligible students.