The COVID-19 pandemic required a major federal response. But even before that, the federal government's long-term fiscal path was unsustainable because debt was growing faster than the economy.

Under our projections, the debt will reach its highest point in history in 2028 and continue to grow faster than gross domestic product. In FY 2020, debt held by the public reached about 100% of GDP, up from about 79% in FY 2019.

Once public health goals are achieved and the economy substantially recovers, Congress and the administration should quickly pivot to putting the government on a sustainable long-term fiscal path.

GAO and the Congressional Budget Office's Projections of Federal Debt 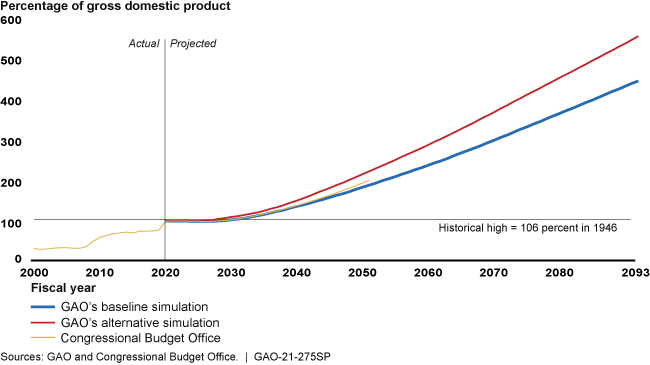 The COVID-19 pandemic has resulted in catastrophic loss of life and substantial damage to the global economy, stability, and security. This continuing crisis prompted a major federal response. Death tolls remain high and many people remain unemployed, including both those temporarily laid off and those who have permanently lost their jobs.

Congress and the administration have responded in an unprecedented manner to address the COVID-19 pandemic and the resulting severe economic repercussions. Since March 2020, pandemic response has cost trillions of federal dollars. Until the country better contains the virus, the pandemic will likely remain a significant obstacle to more robust economic activity.

After the pandemic recedes and the economy substantially recovers, Congress and the administration should quickly pivot to developing an approach to place the government on a sustainable long-term fiscal path. In fiscal year 2020 debt held by the public reached about 100 percent of gross domestic product (GDP), up from about 79 percent of GDP in fiscal year 2019. Absent any action, debt held by the public is projected to surpass 200 percent of GDP by 2048.

Under our projections, the debt will reach its highest point in history in 2028 and continue to grow faster than GDP thereafter.

In the long term, spending on federal health care programs and Social Security drive most of the increase in federal non-interest spending as a share of GDP.

As shown below, many of these key trust funds are projected to be depleted within 15 years or less. 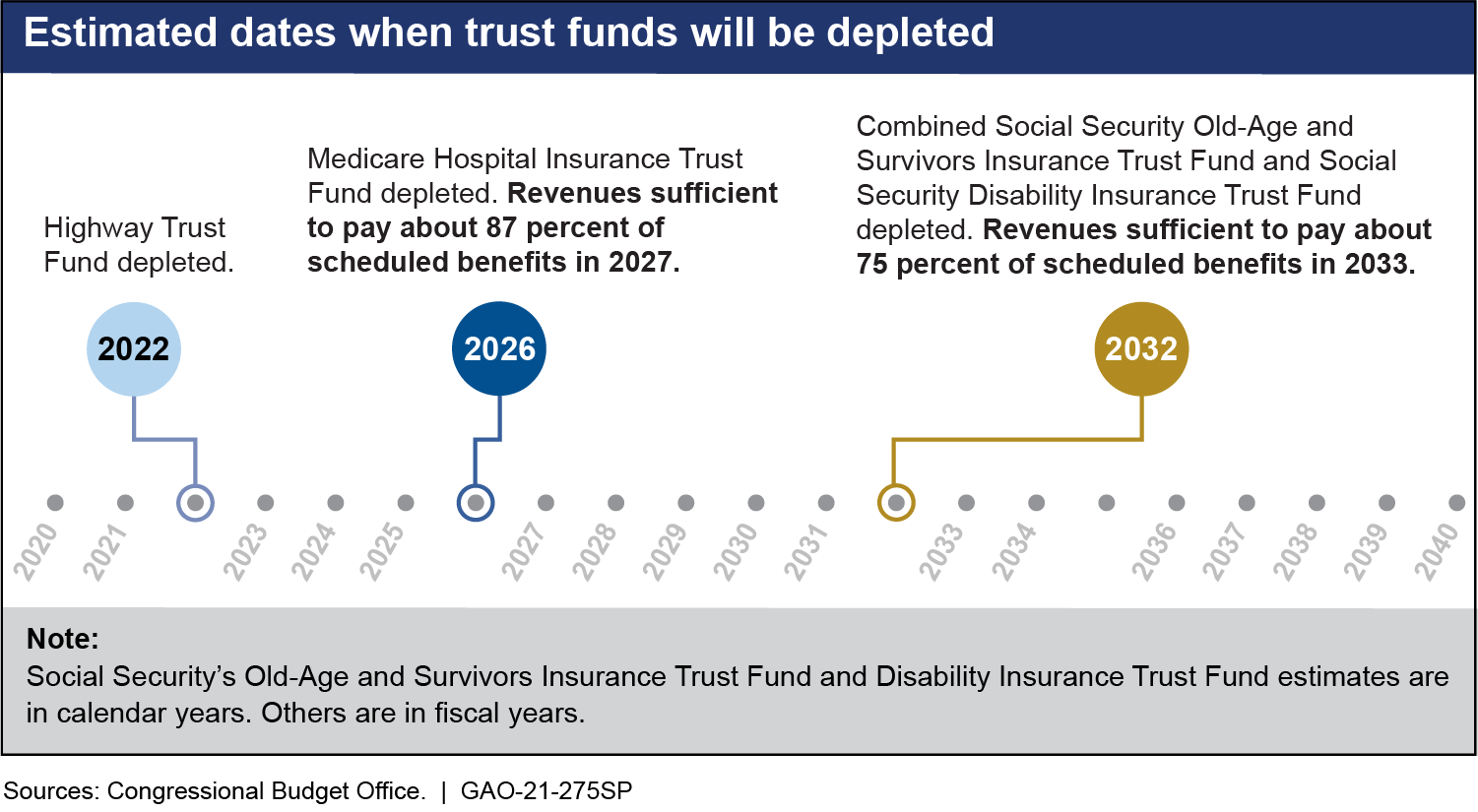 Absent Changes, Continued Spending and Revenue at Unsustainable Levels Will Pose Serious Challenges in the Future

The unsustainable fiscal path strains the federal budget and contributes to growing debt. According to CBO, high and rising federal debt increases the likelihood of a fiscal crisis and could lead to a large drop in the value of the dollar or to a loss of confidence in the government’s ability or commitment to repay its debt in full.

Consequences of rising debt. Rising debt could also cause policymakers to feel restrained in their capacity to support the economy during a downturn or unexpected events, such as global military conflicts, natural disasters, or public health emergencies. After the current pandemic recedes and the economy substantially recovers, policymakers should turn their attention to swiftly developing a strategy to change the long-term fiscal path. The sooner actions are taken, the less drastic the changes will need to be.

Effects of compounding interest. Persistently low interest rates have resulted in lower spending on net interest. However, due to the substantial size of the debt, GAO projects net interest will become the largest category of spending by 2050, growing from 1.6 percent of GDP in 2020 to 8.9 percent of GDP by 2050. The costs of debt vary based on interest rates, and increased rates can have a compounding effect on the debt. Spending on net interest was $345 billion in fiscal year 2020 and is projected to exceed $1 trillion in fiscal year 2033.

Uncertainty about the debt limit. The debt limit is a legal limit on the total amount of federal debt that can be outstanding at one time. However, it does not restrict Congress’s ability to pass spending and revenue legislation that affects the level of debt in the future, nor does it otherwise constrain fiscal policy. In August 2019, Congress and the President suspended the debt limit through July 2021. Uncertainty over whether the debt limit will be raised or suspended leads to increased borrowing costs and disrupts the market for Treasury securities. GAO has suggested previously that Congress consider alternative approaches to the debt limit as part of any long-term fiscal plan.

Implementing a long-term fiscal plan at the right time can help ensure that the United States remains in a strong economic position to meet its security and social needs and to preserve the flexibility to address future events such as public health emergencies.

GAO has also suggested that Congress consider establishing a long-term fiscal plan for returning to a sustainable long-term path. In 2020, GAO suggested that as part of this plan, Congress consider including fiscal rules and targets, such as a debt-to-GDP target. In developing a fiscal plan, policymakers will need to consider the entire range of federal activities, both revenue (including tax expenditures) and spending (entitlement programs, other mandatory spending, and discretionary spending) that affect the debt path. 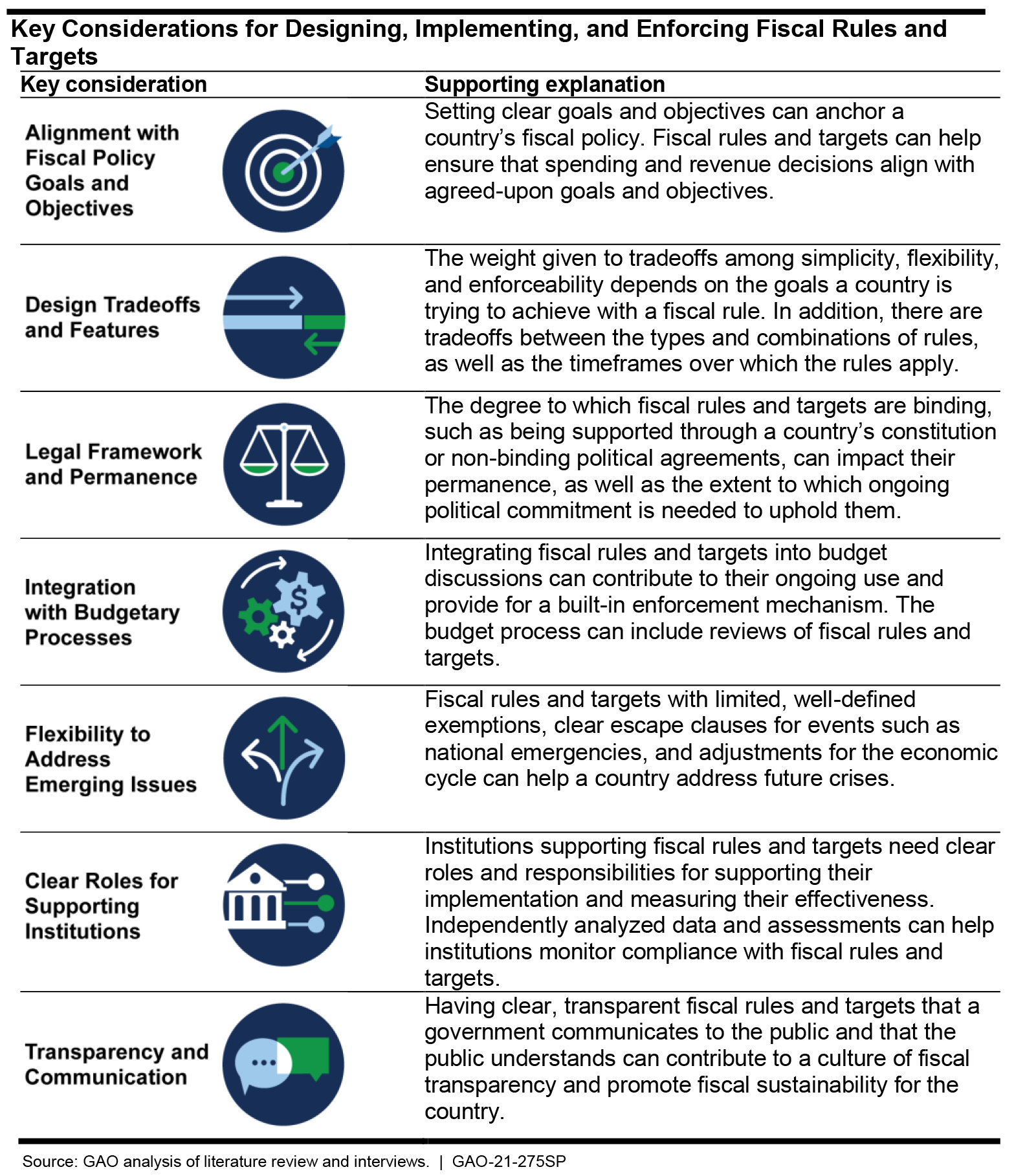 Narrow the tax gap. Reducing the gap between taxes owed and those paid could increase tax revenues by billions of dollars annually. The average annual net tax gap was estimated to be $381 billion for tax years 2011 through 2013.

Implement program reforms. GAO estimates that billions of dollars in additional financial benefits could be achieved by addressing high-risk problems, improving service to the public, and strengthening government performance and accountability. Since fiscal year 2010, actions taken so far by Congress and executive branch agencies have resulted in roughly $429 billion financial benefits.