Army bases provide lodging for official travelers who pay for the rooms with their per diem allowance. In 2009, the Army began to privatize its on-base hotels with the goal of more quickly addressing the poor condition of the facilities.

Privatization included constructing new hotels, and it has improved on-base lodging. But improvements have taken longer than expected and plans have changed—information not included in reports to Congress. We also found Army estimates likely overstate how much this effort reduced costs.

We recommended that DOD provide key information to Congress and improve how it gathers lodging program data.

A new Candlewood Suites hotel replaced the lodging facility at Fort Meade, MD, as part of the Army’s privatization efforts 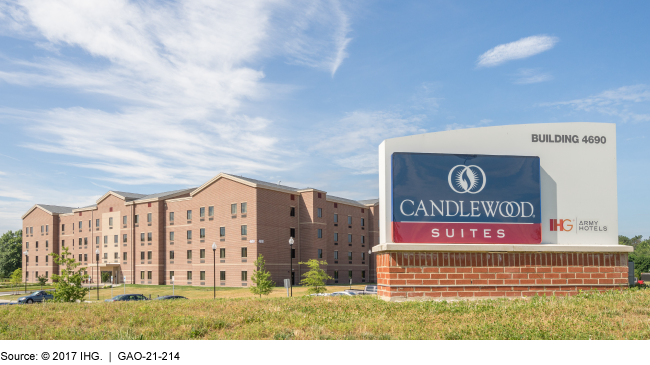 Since privatizing its domestic on-base hotels, referred to as lodging, the Army has made a variety of improvements, including the replacement of lodging facilities with newly constructed hotels (see fig.). However, improvements have taken longer than initially anticipated, development plans have changed, and the Office of the Secretary of Defense (OSD) has not included key information about these delays and changes in reports to Congress. If OSD were to provide this additional information, Congress would be better able to determine whether the Privatized Army Lodging (PAL) program has achieved its intended objectives or fully consider whether the other military services should privatize their respective lodging programs.

Room at an Army Lodging Facility before Privatizing and Room at the New Candlewood Suites Hotel Built at Yuma Proving Ground, AZ, in 2013

The Army does not estimate cost savings from the PAL program, but instead produces an annual cost avoidance estimate to demonstrate some of the financial benefits resulting from the privatization of its lodging program. Army officials stated that they calculate cost avoidance by comparing the room rate it charges for its lodging—which is limited to 75 percent of the average local lodging per diem rate across its installations—to the maximum lodging per diem that could be charged for that location. However, by using this approach, the Army is likely overstating its cost avoidance, because off-base hotels do not always charge 100 percent of per diem. Until the Army evaluates the methodology it uses to calculate its cost avoidance, decision makers in the Department of Defense (DOD) and Congress cannot be sure that the reported financial benefits of privatization have actually been achieved.

OSD's oversight of lodging programs has been limited in some cases. First, OSD and the military services lack standardized data that would be useful for making informed decisions about the lodging programs. Second, DOD requires both servicemembers and civilian employees to stay in on-base lodging when on official travel, with some exceptions. Yet, according to OSD, many travelers are staying in off-base lodging, and OSD has not done the in-depth analysis needed to determine why and how much it is costing the government. Without an analysis that assesses the extent to which travelers are inappropriately using off-base lodging and why it is occurring, as well as a plan to address any issues identified, neither DOD nor Congress can be sure that the department is making the most cost-effective use of taxpayer funds.

In 2009, the Army began to privatize its lodging with the goal of addressing the poor condition of facilities more quickly than could be achieved under continued Army operation. The Navy, Marine Corps, and Air Force currently have no plans to privatize their lodging programs.

The Senate Armed Services Committee report accompanying a bill for the Fiscal Year 2020 National Defense Authorization Act included a provision for GAO to review improvements made to Army lodging, among other things. This report examines the extent to which (1) the Army has improved its lodging facilities since privatizing; (2) OSD reported complete information about the Army's development plans to Congress; (3) the Army has reliably determined any cost savings or cost avoidance as a result of its privatized lodging program; and (4) there are limitations in OSD's oversight of the military services' lodging programs. GAO reviewed policies and guidance; analyzed lodging program data for fiscal years 2017 through 2019 (the 3 most recent years of complete and available information); and interviewed DOD officials.

GAO is making four recommendations, including that DOD require OSD to include key information in reports to Congress, require the Army evaluate its cost avoidance methodology, establish consistent methodologies for lodging program data, and assess the extent to which off-base lodging is inappropriately used for official travel. DOD concurred with all four recommendations.