There have been questions about the media industry's commitment to ensuring workforce diversity, including for Hispanic workers.

In the media industry, service worker positions (e.g., food service) had the highest percentage of Hispanic workers, while management positions had the lowest. 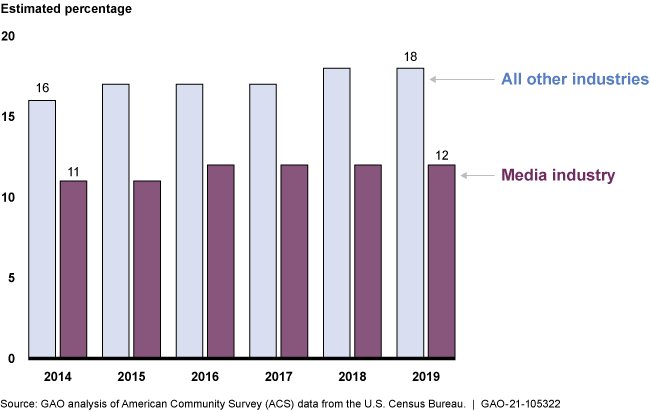 Hispanic representation also varied by occupation. We analyzed ACS data on the race/ethnicity of workers in 13 media occupations and found, on average, about 11 percent of these workers were Hispanic. Equal Employment Opportunity Commission (EEOC) data for 2018, the most recent year data were available, provide a different breakout of occupations that further inform the racial and ethnic makeup of the media industry. According to Employer Information Reports (EEO-1) submitted by media companies to the EEOC, service worker positions—food service, cleaning service, personal service, and protective service—had the highest percentage of Hispanic workers (22 percent). Eight percent of professional positions in the media industry were held by Hispanics. Hispanics were least likely to work in first- and mid-level management positions (7 percent) and in senior/executive management positions (4 percent), according to media companies' reports to EEOC.

The media industry plays an important role in educating and entertaining the public, but some have questioned the industry's commitment to workforce diversity, including for Hispanic workers. The U.S. Census Bureau collects employment and race/ethnicity information from individuals living in the U.S. EEOC collects data from employers on the race/ethnicity of their workers and which positions they hold. GAO was asked to review representation of Hispanics in the media industry, including in the film, television, and publishing industries.

This report examines representation of Hispanics in the media industry and in specific media occupations. GAO analyzed workforce data, including the Census Bureau's annual American Community Survey data for 2014-2019 and EEOC annual Employer Information Reports for 2014-2018, the latest data available during GAO's review.