FDA ensures that imported seafood is safe to eat. If it suspects that products may violate U.S. laws, FDA can detain them at ports until the violation has been resolved—a process called an import alert.

FDA’s goal is to sample at least one shipment of each product before removing it from alert status. We found that for 274 seafood products that FDA removed from import alerts between 2011 and 2018, FDA did not sample shipments for 95% of these products, and does not have a process to ensure it actually conducts such sampling.

We recommended that FDA establish such a process. 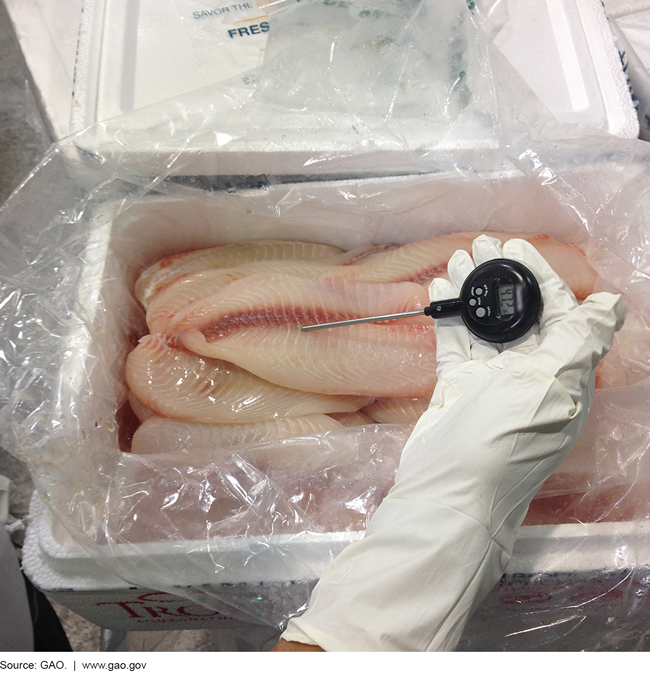 A gloved hand holding a thermometer in raw fish

The Food and Drug Administration's (FDA) import alert process for seafood products includes three key components: (1) establishing new import alerts, which inform FDA field staff and the public that the agency has enough evidence that products appear to violate a federal food safety law to detain those products at U.S. ports of entry without physically examining them; (2) placing firms and products on existing import alerts; and (3) removing firms and products from those import alerts when violations are resolved. As of July 3, 2018—the most recent data at the time of GAO's analysis—FDA had 52 active import alerts affecting imported seafood that addressed a wide range of violations of federal law, including the presence of foodborne pathogens, such as Salmonella , or unapproved animal drug residues.

FDA has not established performance goals and measures for seafood import alerts—key elements for assessing the effectiveness of programs. Goals explain the outcomes a program seeks to achieve, and measures track progress towards those goals. In February 2019, FDA published a broad plan for the safety of imported food. The plan states that FDA intends to develop performance goals and measures related to imported food safety, but FDA has not established a time frame for doing so. By establishing a time frame and developing such goals and measures, FDA would be better positioned to assess how well its seafood import alert activities are supporting the agency in achieving its food safety mission.

Imports account for over 90 percent of U.S. seafood consumption. FDA and the Department of Homeland Security (DHS) both play a role in overseeing imported seafood. FDA is responsible for ensuring the safety of most imported seafood. DHS provides FDA with import data on FDA-regulated products, including seafood. If FDA finds that imported seafood products appear to violate U.S. laws, FDA may place the products, firms, or countries on an import alert.

GAO was asked to review FDA's efforts to use import alerts to ensure the safety of imported seafood. This report, among other things, (1) describes FDA's import alert process for seafood products, (2) examines FDA oversight of key activities to support import alert removal decisions, and (3) examines the extent to which FDA has assessed the effectiveness of its seafood import alerts. GAO reviewed FDA procedures and data, including data on 274 removal decisions, for a non-generalizable sample of seven import alerts selected for a range of violations of federal law. GAO also interviewed FDA officials.

Podcast Roundup – Podcasts You May Have Missed