Customs and Border Protection is responsible for keeping trade and travel flowing across U.S. borders while also intercepting terrorists, criminals, and contraband. Inspecting the millions of people and vehicles coming from Canada and Mexico is part of the job.

However, CBP's inspection policies are outdated and don't reflect new technology or threats. For example, key policies do not address how to handle the dangerous drug fentanyl. This leaves officers without guidance they need to do inspections properly and consistently.

We made 4 recommendations to improve management and oversight of inspections, including that CBP update its policies. 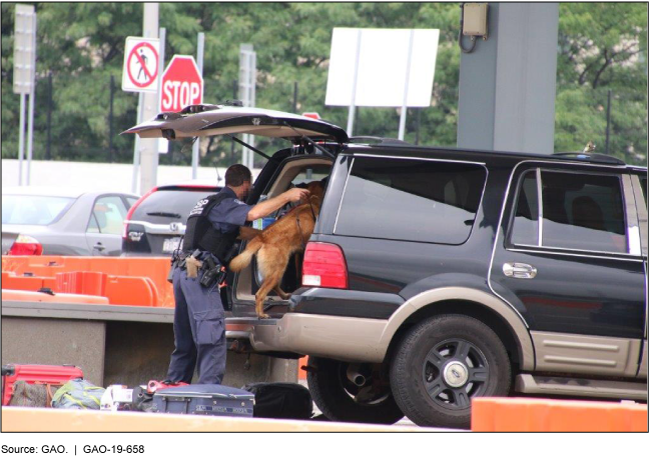 U.S. Customs and Border Protection (CBP) has processes for inspecting passenger vehicles, pedestrians, and commercial vehicles at U.S. land ports of entry (POE). These processes include reviewing travel documents, screening against law enforcement databases, and using canines and X-ray equipment (see figure below). However, because CBP has not updated many of its policies—in a few cases for almost 20 years—they do not always reflect changes in technology or processes, such as those for conducting searches and handling fentanyl. By reviewing and updating policies, CBP could help ensure officers have guidance needed to consistently and properly perform inspections.

CBP has various mechanisms at the port, field office, and national levels to monitor inspection activities at land POEs, but opportunities exist to enhance analysis of the results from its national level Self-Inspection Program (SIP) and covert operational testing. The SIP is an annual self-assessment that POEs are to conduct to determine compliance with CBP policies. CBP analyzes the results of the SIP annually to identify systemic compliance issues across CBP that year; however, it does not analyze noncompliance at individual POEs over time. By analyzing these data, CBP could better identify and address deficiencies at individual POEs. In addition, CBP has produced three comprehensive assessments, which analyzed aggregated results for certain types of covert tests, such as fraudulent document tests, conducted at land POEs in fiscal years 2013, 2014, and 2018. However, CBP has not done so for other types of tests, such as canine contraband detection tests, conducted from fiscal years 2013 through 2018. By implementing a policy for periodically conducting such analyses, CBP could identify vulnerabilities, trends, and best practices occurring more broadly.

CBP uses various sets of measures to assess its efforts to detect illegal activity at land POEs. CBP performance measures generally reflect the key attributes of effective measures, but CBP does not set an ambitious and realistic target for one measure. CBP's target for the land border interception rate—the estimated percentage of major violations in privately-owned vehicles that CBP intercepts out of the projected total number of major violations—is lower than the actual reported rate for fiscal years 2015 through 2018. A more ambitious target for the interception rate would better encourage CBP to review past performance of inspection activities that impact the measure and challenge CBP to identify ways to improve performance .

CBP, within the Department of Homeland Security (DHS), is the lead federal agency charged with a dual mission of facilitating the flow of legitimate travel and trade at the nation's borders while keeping terrorists and their weapons, criminals and their contraband, and inadmissible aliens out of the country. GAO was asked to review CBP's process for inspecting passenger vehicles, pedestrians, and commercial vehicles at land POEs to secure the border. This report examines to what extent CBP (1) has processes and policies for inspections, (2) monitors inspection activities, and (3) has measures to assess its efforts to detect illegal activity of passengers, pedestrians, and commercial vehicles at land POEs. To address these questions, GAO analyzed CBP documents and data related to inbound inspections; interviewed officials; and observed operations at a non-generalizable sample of seven land POEs, selected to reflect a range of traffic volumes and geographic locations, among other things. This is a public version of a sensitive report that GAO issued in June 2019. Information that DHS deemed sensitive has been omitted.