About 200,000 servicemembers transition to civilian life each year, according to DOD. Some veterans may struggle to find civilian employment. For example, a veteran may not know how his or her military training could apply to a civilian job. Federal law requires DOD and the Coast Guard to establish centers to provide help.

We found they have established more than 300 employment assistance centers at military installations worldwide. According to DOD, about 90% of eligible active duty servicemembers used the Transition Assistance Program, a program offered at the centers that provides counseling, information on veterans' benefits, and more. 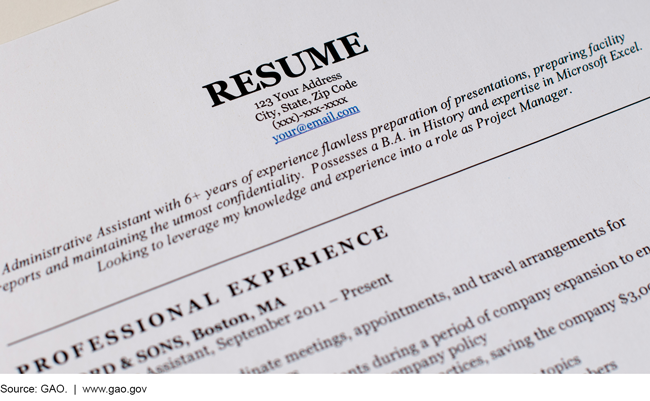 Example of a resume

About 300 employment assistance centers have been established at military installations worldwide. These centers operate the mandatory Transition Assistance Program (TAP), which provides counseling, employment assistance, and information on veterans' benefits to help separating servicemembers transition to civilian life. Other employment and family support services are also available at the centers. Complete and reliable data on the use of all of the support services administered by the centers is not available, but efforts are underway to collect such data.

Regarding TAP, DOD reported that 138,256 (90 percent) of eligible separating active duty servicemembers; 12,069 (57 percent) of National Guard members; and 13,630 (64 percent) of eligible Reserve service members participated in TAP in fiscal year 2018. Though not required, according to DOD officials, the agency collected data for fiscal year 2017 from each military branch of service on the employment readiness and other family support services provided at the centers. However, DOD officials stated that the centers were reporting the information differently. As a result, DOD is planning to revise the reporting requirements and method of data collection to gather more accurate information.

The Coast Guard also collects TAP participation data, but GAO's recent prior work found that the data were unreliable and the agency has not yet implemented GAO's recommendation to establish policies and procedures to improve the reliability and completeness of the data. Coast Guard officials reported that they do not collect data on the other employment services provided at its centers beyond TAP, and the agency is not required to do so.

DOD and the Coast Guard use several databases and documents to record servicemembers' training that may be applicable to future civilian employment. For example, the Verification of Military Experience and Training (VMET) is a key document that compiles information from the military branches' databases and lists the training servicemembers received and their military occupations in civilian terms. Agency officials said TAP guidance helps ensure that servicemembers have access to the VMET and similar documents, which the servicemember may then share with civilian entities, such as potential employers and state employment agencies. According to DOD officials, as part of completing TAP, servicemembers must confirm that they either have hard copies of their documents or understand how to access them online. According to these officials, DOD does not share servicemembers' information directly with external entities, unless requested by a servicemember.

Approximately 200,000 servicemembers transition from military service to civilian life each year, according to DOD. Some veterans may experience difficulty finding civilian employment after leaving the service. For example, a veteran may be unfamiliar with effective job search strategies, and may not know how their military experience and training could apply to jobs in the civilian workforce. Federal law requires DOD and the Department of Homeland Security (DHS) to establish permanent employment assistance centers at appropriate military and Coast Guard installations. In addition, under the law, DOD and DHS are required to take other steps that may help servicemembers apply their skills and experience to civilian employment. Specifically, the agencies must provide servicemembers a certification or verification of any job skills and experience acquired while on active duty that may be applicable to civilian employment and must develop procedures for sharing certain information with civilian entities, such as potential employers and state employment agencies.

The conference report accompanying the John S. McCain National Defense Authorization Act for Fiscal Year 2019 included a provision for GAO to review the employment assistance programs authorized by 10 U.S.C. § 1143. This report describes (1) the number and locations of employment assistance centers currently in operation, and what is known about how frequently servicemembers use them, and (2) how DOD and the Coast Guard record servicemembers' training that may be applicable to future civilian employment, and what procedures are in place to share such information with civilian entities.

GAO reviewed a list of the military installations with employment assistance centers from DOD and DHS as well as agency documents on the use of employment services at the centers, and the various databases and documents used to record the training servicemembers received. GAO also reviewed relevant federal laws, regulations, and agency policies for TAP. GAO also reviewed DOD data on TAP participation for fiscal 2018. Lastly, GAO interviewed officials from the Coast Guard, DHS, DOD, and the Department of Labor.