A 2016 law called for minimum federal safety standards for storage sites, and the Department of Transportation has issued interim standards while working on final ones.

The department's efforts have not yet followed some of our leading practices for strategic planning. For example, it has not set a goal to measure improved safety at storage sites. We recommended steps to improve planning efforts.

Approximate Location of Natural Gas Storage Sites in Counties with More than 100,000 People 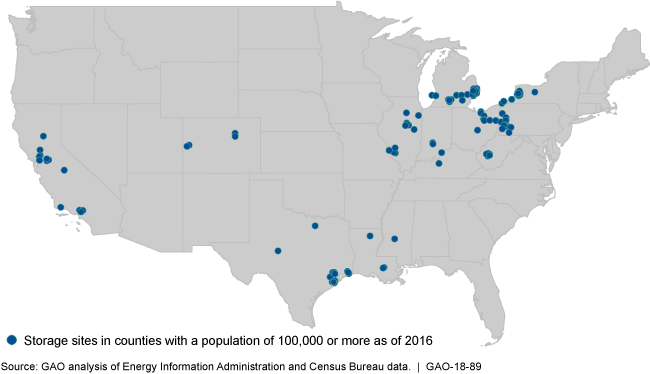 U.S. map showing sites primarily along the West and Gulf coasts, and in the Great Lakes region.

To meet its requirement under the Protecting Our Infrastructure of Pipelines and Enhancing Safety (PIPES) Act of 2016, the Department of Transportation's (DOT) Pipeline and Hazardous Materials Safety Administration (PHMSA) issued minimum safety standards in an interim rule and plans to finalize them by January 2018. Under the interim standards, site operators are to follow industry-developed best practices to detect and prevent leaks and plan for emergencies, among other things. Since the interim rule went into effect in January 2017, the minimum safety standards apply to all 415 natural gas storage sites, and the rule will be subject to further revision before it is final.

To enforce its safety standards, PHMSA has taken steps to establish a natural gas storage safety enforcement program. For example, PHMSA has started developing a training program for its inspectors. PHMSA also has identified a strategic goal for its program—to promote continuous improvement in safety performance—and is developing a performance goal for its training program.

Natural gas storage is important for ensuring that natural gas is available when demand increases. There are 415 storage sites—including underground caverns and depleted aquifers and oil and gas reservoirs—located in 31 states, often near population centers (see fig.). Leaks from these sites, such as one near Los Angeles that led to the temporary relocation of about 8,000 families in 2015, can result in environmental and economic damage. Until 2016, states set standards for 211 sites, but there were no standards for 204 sites connected to interstate pipelines subject to federal jurisdiction. With passage of the PIPES Act of 2016, PHMSA, an agency within DOT that sets and enforces standards for energy pipelines, among other things, was tasked with issuing minimum standards for all gas storage sites.

GAO is making two recommendations, which are that PHMSA (1) define levels of performance and address all core program activities and (2) use budget data to refine performance goals for its gas storage program. DOT concurred with GAO's recommendations.