By buying directly from the commercial marketplace, DOD can take advantage of the latest innovations and reduce its purchasing costs.

We found that, as a portion of DOD's total contract spending, contracts awarded using federal procedures to purchase commercial items (for both products and services) have declined slightly between fiscal years 2007 and 2016, roughly in line with the decline in DOD's total spending. We also found that 54% of these contracts were for products and 46% were for services in FY 2016.

Recent legislation has, among other things, prompted DOD to improve its guidance on standards for purchasing commercial items. 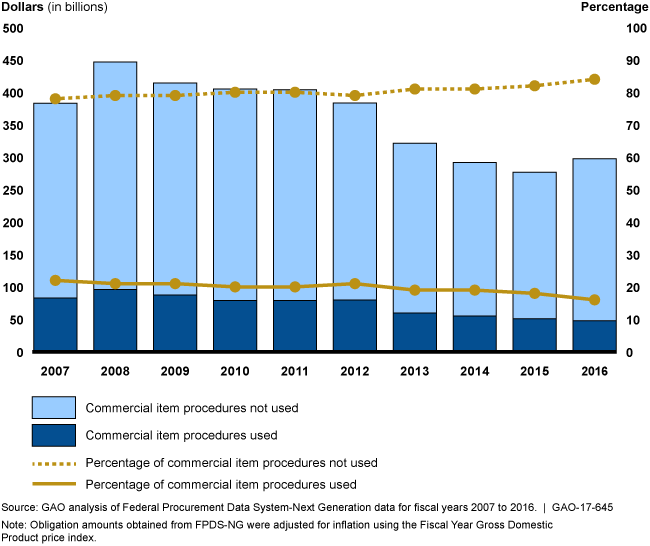 A bar graph showing DOD's use of federal procedures to purchase commercial items.

Data from the Federal Procurement Data System-Next Generation (FPDS-NG) show that as a proportion of the Department of Defense's (DOD) total contracting obligations, contracts awarded using commercial item procedures have gradually declined in a narrow range from fiscal years 2007 to 2016 (see figure). These numbers, however, do not reflect the full extent to which DOD acquires commercial items because FPDS-NG only captures information on whether or not commercial item acquisition procedures were used to acquire the product or service, and not whether items purchased are commercial or not commercial.

In addition, GAO found that for fiscal year 2016:

Recent legislation from Congress includes a number of provisions related to commercial item acquisitions, including provisions intended to ensure contracting officers are negotiating fair and reasonable prices for commercial items. DOD has taken a number of actions to address this legislation, including updating its Guidebook for Acquiring Commercial Items and proposing Defense Federal Acquisition Regulation Supplement rules. When implemented, these rules will promote consistency in making commercial item determinations, among other things. Additionally, DOD has created six Commercial Item Centers of Excellence—a cadre of experts within DOD to provide advice to the acquisition workforce with regard to commercial item authorities.

GAO is not making recommendations in this report. The Department of Defense had no comments on a draft of this report.