The Department of Defense (DOD) faces five key challenges that significantly affect the department's ability to accomplish its mission. These include the need to (1) rebalance forces and rebuild readiness; (2) mitigate threats to cyberspace and expand cyber capabilities; (3) control the escalating costs of programs, such as certain weapon systems acquisitions and military health care, and better manage its finances; (4) strategically manage its human capital; and (5) achieve greater efficiencies in defense business operations. DOD has demonstrated progress addressing challenges, but significant work remains. Specifically:

Rebalance forces and rebuild readiness: The military services today are generally smaller and less combat ready than they have been in many years, and each military service has been forced to cut critical needs in areas such as training, maintenance, and modernization due to budgetary constraints, according to DOD. Officials said that the result of the current state of readiness is that military forces are not strong enough to protect vital U.S. national security interests from worldwide threats. DOD has pursued plans to strengthen military capabilities, but must take key actions to rebalance, rebuild, and modernize the capabilities of U.S. military forces. For example, DOD needs to take further steps to meet the demands of geographic commanders and examine whether there are opportunities to reduce the high demand on special operations forces. DOD also needs to provide decision makers with complete and accurate budget and cost information to make well-informed decisions on weapon systems modernization investments and mitigate potential risks to certain modernization initiatives, including regarding the F-35 aircraft—a program on which DOD plans to spend over $1 trillion to operate and sustain over its life cycle. The military services have plans underway to rebuild readiness for portions of their military forces, but these initiatives are at risk without more comprehensive planning and an approach to measure progress in attaining goals (see table). Since 2011, GAO has directed 39 recommendations to DOD in this area, of which 35 remain open, including 5 priority recommendations.

Summary of Readiness Challenges Faced by the Military Services

Mitigate threats to cyberspace and expand cyber capabilities: In February 2016, the Director of National Intelligence identified cyber threats as first among strategic threats to the United States, surpassing terrorism. According to the 2016 Federal Information Security Management Act report, more than 30,000 data security incidents compromised federal information systems during fiscal year 2016, 16 of which were categorized as major incidents. DOD has become increasingly reliant on the Internet and other networks, which are central to its military operations and enable essential services. At the same time, the vulnerability of its cyber networks has grown significantly, due in part to the increase in the severity of cyber attacks. DOD has made progress in developing a cyber strategy to defend its networks and protect the nation from cyber attacks, but needs to take additional actions to improve its planning for the continuity of operations in a degraded cyber environment, such as providing defense organizations with guidance and training to practice responses during exercises. DOD also needs to take further action to strengthen its insider threat awareness program to address the increased risk of the unauthorized disclosure of classified information from defense information systems and to improve the visibility and oversight of the cyber capabilities of all National Guard units, such as computer network defense teams that could be used during a cyber incident. Since 2011, GAO has directed 33 recommendations to DOD in unclassified and sensitive but unclassified reports, of which 14 remain open, including 5 priority recommendations.

Control escalating costs and manage finances: DOD's $580 billion fiscal year 2016 budget accounts for nearly half of the federal government's discretionary spending, and DOD's costs are growing. DOD plans to invest $574 billion to develop and acquire 78 major acquisition programs through fielding, such as the F-35 and the Littoral Combat Ship, while annual military health care costs are expected to increase from about $60 billion in fiscal year 2017 to about $70 billion by fiscal year 2028. Further, DOD remains one of the few federal entities that cannot demonstrate an ability to accurately account for and reliably report its spending or assets. DOD has undertaken a series of reform initiatives to control costs and improve its financial management, but needs to more consistently implement leading acquisition practices to manage the costs of its weapon systems. DOD also needs to better address improper payments to control rising costs in the military health system, which has experienced a 217 percent increase in costs since 2001 (see fig.). Further, DOD should take steps to identify underutilized space in its facilities to reduce its reliance on costly leased facilities. Finally, DOD needs to remediate financial management deficiencies, which prevent it from producing auditable financial statements and result in inadequate financial and other information available to DOD to manage its operations. Since 2011, GAO has directed 79 recommendations to DOD in this area, of which 72 remain open, including 52 priority recommendations.

Strategically manage human capital: DOD estimates that it will spend nearly $180 billion in fiscal year 2017 on pay and benefits for its military personnel and about $70 billion for its civilian employees. Taken together, funding for military and civilian pay and benefits represents nearly 50 percent of DOD's budget in fiscal year 2016 (see fig.). DOD also estimates that it spent about $115 billion on certain contractor-provided services in fiscal year 2015, although we have raised questions regarding the reliability of DOD's information on its contractor workforce. Current budget and long-term fiscal pressures on the department increase the importance of strategically managing DOD's human capital. DOD has taken steps to develop better information about the skill sets possessed and needed within the department's military, civilian, and contractor workforces, but needs to take further actions to complete a workforce mix assessment, improve the methodology for estimating workforce costs, and address skill gaps in critical workforces. DOD should also establish a comprehensive compensation strategy for its military personnel to help achieve its recruiting and retention goals, including a cost-effective approach for managing the $3.4 billion the department spent in fiscal year 2015 on special and incentive pays for active-duty service members. Since 2011, GAO has directed 67 recommendations to DOD in this area, of which 64 remain open. 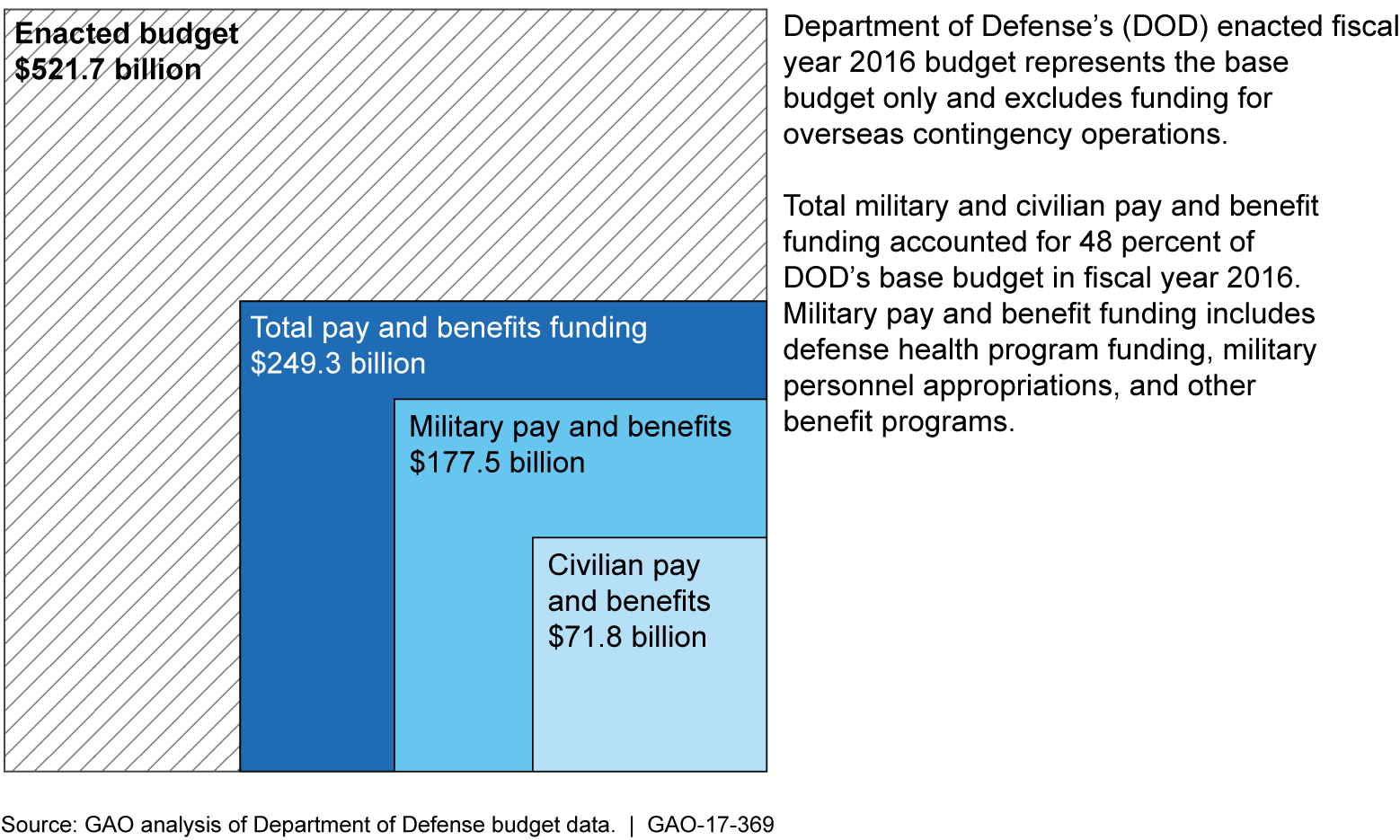 Achieve greater efficiencies in defense business operations: DOD spends billions of dollars each year acquiring business systems and contractor-provided services to support the warfighter. In 2014 alone, DOD obligated $85 billion on three types of contractor-provided services—including an amount obligated for knowledge-based and research and development services that was more than double what the department spent to purchase aircraft, land vehicles, and ships. DOD has emphasized the need to improve its business practices and reduce overhead and free up resources for higher priorities, but needs to take additional actions to drive business transformation efforts, implement management controls for its business systems investments, and develop guidance to manage the acquisition of contracted services. DOD also needs to improve the reliability of its data to enable it to properly size its headquarters organizations, which have experienced significant growth; to accomplish missions; and identify potential cost savings. Since 2011, GAO has directed 49 recommendations to DOD in this area, of which 38 remain open, including 8 priority recommendations.

Department of Defense's (DOD) High-Risk Areas, Years on the High-Risk List, and Status of DOD's Efforts to Address Five Criteria for Removal

The United States faces a complex national security environment, to include strategic challenges presented by traditional state actors and destabilizing nonstate actors, such as the Islamic State of Iraq and Syria. Recognizing these challenges, DOD has emphasized the importance of providing forces that are capable of performing a full range of missions. GAO has issued hundreds of reports that bring greater attention to areas where DOD can strengthen its operations to more efficiently and effectively meet its mission.

GAO has made approximately 3,100 recommendations to DOD since 2006. Of these, about 1,037 remain open, including 78 priority recommendations that, if implemented, could significantly improve DOD's operations. In commenting on this report, DOD stated that although the report made no new recommendations, the department stands by its responses and concurrence to taking the requisite actions needed to address all previous recommendations.

Celebrating 68 Years of Keeping an Eye on Defense