Information on Violations of Safety, Health, and Fair Labor Standards

The Department of Labor cited about 1% of defense contractors for willful or repeated safety, health, or fair labor violations in fiscal years 2015-2019. But, the data we found didn't indicate if the violations occurred while performing work related to a defense contract. It also didn't contain key company identification numbers necessary to match federal contracting data to safety and health violation data in about 40% of the cases.

Labor most often cited these contractors during the 5-year period for:

Safety and health violations related to toxic substances and machinery

GAO's analysis of federal data found that about 1 percent of companies with Department of Defense (DOD) contracts were cited for willful or repeated safety, health, or fair labor violations in fiscal years 2015 through 2019. However, these data do not indicate whether the violations occurred while performing work related to a defense contract.

Companies with DOD Contracts Cited for Willful or Repeated Violations under the Fair Labor Standards Act of 1938 or the Occupational Safety and Health Act of 1970, Fiscal Years 2015 through 2019 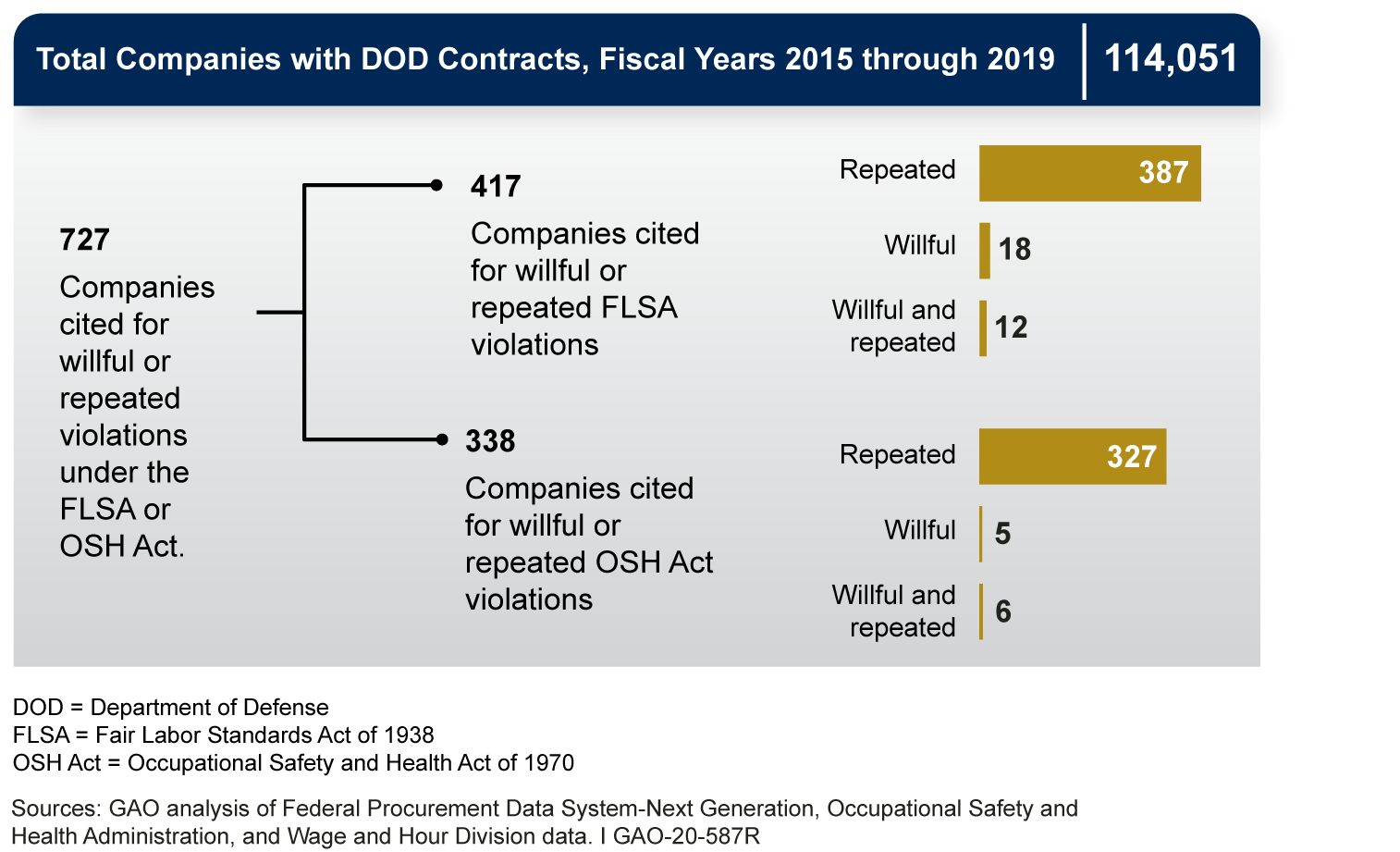 Because of limitations in available data, GAO could not determine the total incidence of willful or repeated violations of safety, health, or fair labor standards among all companies with a defense contract in this 5-year time frame. Specifically, about 43 percent of the Department of Labor's (Labor) safety and health violation data did not include key company identification numbers. These numbers are necessary to match federal contracting data to violation data. GAO recommended in February 2019 that Labor explore ways to address this issue. While Labor neither agreed nor disagreed with the recommendation, it issued a memorandum in May 2019 directing its Occupational Safety and Health Administration staff to make every reasonable effort to collect this information during inspections and enter it into its database. About 1 percent of Labor's data on fair labor violations were missing these key company identification numbers.

The National Defense Authorization Act for Fiscal Year 2020 included a provision for GAO to report on the number of DOD contractors that Labor found to have committed willful or repeated violations under the Occupational Safety and Health Act of 1970 (OSH Act) or the Fair Labor Standards Act of 1938 (FLSA) for fiscal years 2015 through 2019. This report examines the number of DOD contractors that were cited for willful or repeated safety, health, or fair labor standards violations under the OSH Act or FLSA, and the nature of those violations for fiscal years 2015 through 2019.

GAO analyzed federal contracting data to identify companies that had defense contracts in fiscal years 2015 through 2019, and matched them to Labor data on companies cited for willful or repeated safety, health, or fair labor standards violations. In addition, GAO used the Labor data to identify information on the nature of the violations. GAO also reviewed relevant federal laws and regulations, and agency documents.