Homeownership is often referred to as the American dream—but the 2007-2009 financial crisis put it out of reach for many. Even in housing markets that have since recovered, many Americans still find themselves locked out of homeownership.

The homeownership rate declined or was flat in all cities

Average home prices grew in all cities, but at considerably different rates

Most cities became denser, and some also expanded outward

Following a decade of decline, including after the 2007–2009 financial crisis, the national homeownership rate started to recover in 2016 (see figure). 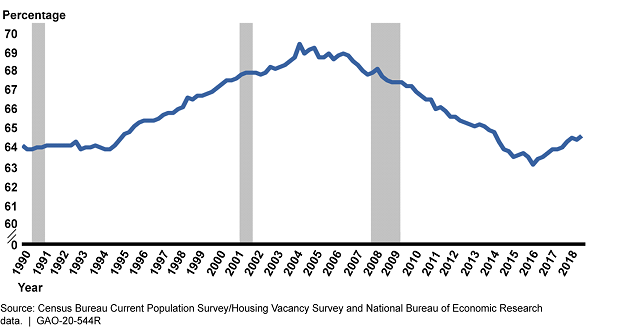 However, not all Americans have benefitted from the recovery, even in housing markets that appear to be thriving. GAO examined homeownership trends during 2010–2018 in nine core-based statistical areas (cities)—Chicago; Cleveland; Columbia, South Carolina; Denver; Houston; Pittsburgh; San Francisco; Seattle; and Washington, D.C.

GAO's analysis of homeownership trends in these nine cities during 2010–2018 illustrates two main points: (1) Cities grew differently and accommodated growth to differing degrees, and (2) who owns and who can buy a home differs by location and type of buyer, sometimes substantially.

Historically, owning a home has been one of the primary ways Americans built wealth and financial security. This is one reason why the availability and price of housing is consequential to both households and policymakers. GAO was asked to assess the state of the current domestic housing market and this report, one in a series, focuses on homeownership trends.

To conduct this work, GAO used data from the Census Bureau's American Community Survey and Home Mortgage Disclosure Act data (loan and application data filed by mortgage lenders), among other sources, to identify trends in nine selected cities during 2010–2018, the most current data available at the time of GAO's review. This report examines trends prior to the Covid-19 pandemic and does not account for the profound effect it likely will have on homeowners. GAO has ongoing work that will examine implementation of foreclosure and eviction protections authorized in recent legislation.

Explore our Key Issues on Housing