Based on a survey of experts associated with studying the costs of crime and a literature review, GAO found that there is no commonly used approach for estimating the costs of crime, and experts face multiple challenges when making estimates. GAO identified four primary methods to estimate costs, each with limitations: 1) measuring effects on markets, 2) using jury awards, 3) surveying the public for its willingness to pay to reduce crime, and 4) calculating individual categories of cost to develop a total cost. Experts stated that current methodologies are inadequate to fully estimate costs and that they face numerous challenges in developing estimates, such as the value of intangible costs of crime. As a result, research has produced widely varying and inconsistent estimates on the costs of crime.

Experts provided five broad areas they believe warrant further study to improve understanding of the costs of crime: 1) costs of crimes not reported to law enforcement agencies, 2) costs of punishment and incarceration, 3) costs of recidivism, 4) costs of potential bias in the administration of justice, and 5) uncertainty of cost estimates. Further, experts noted that researchers could refine estimates by combining different methodological approaches. They urged researchers to consider cost of crime estimates under different policy scenarios, such as in setting sentencing guidelines, to help better inform policy decisions.

Figure: Examples of Costs of Crime and Elements to Categorize Costs 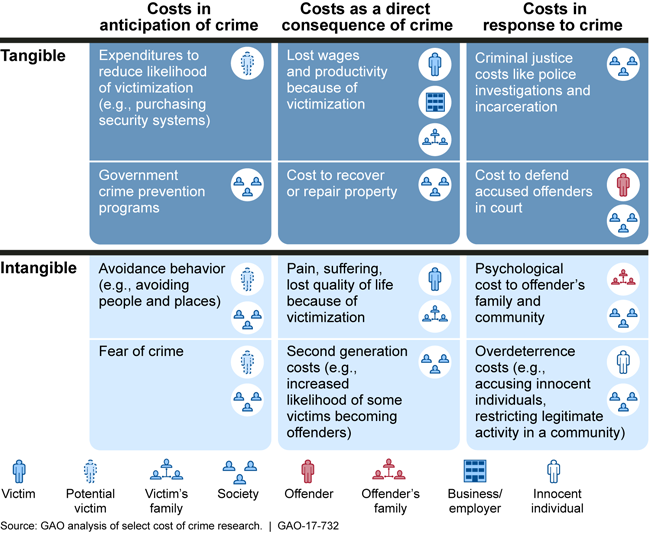 Crime and society's response to it pose significant costs to the United States. The Department of Justice's Bureau of Justice Statistics reported that federal, state, and local governments collectively spent over $280 billion in fiscal year 2012 (adjusted to 2016 dollars) on criminal justice programs such as police protection, the court system, and incarceration. There are also many other financial and nonfinancial effects of crime that researchers consider when estimating the total costs of crime in the United States. These can include tangible costs such as replacing damaged property or medical care to treat victims' injuries, and intangible costs such as changes in people's behavior to avoid crime, among many other costs. Researchers have estimated varying annual costs of crime, including totals of $690 billion, $1.57 trillion, and $3.41 trillion, adjusted to 2016 dollars.