Action is Needed to Address the Federal Government's Fiscal Future

A plan is needed to put the nation on a sustainable long-term fiscal path. But in the near-term, Congress and executive branch agencies have opportunities to improve the government's fiscal condition, including trying to address improper payments and the tax gap, as well as making changes where federal programs or activities are at high risk or fragmented, overlapping, or duplicative.

According to the 2016 Financial Report, the federal deficit in fiscal year 2016 increased to $587 billion—up from $439 billion in fiscal year 2015. Federal receipts grew a modest $18.0 billion due primarily to extensions of tax preferences, but that was outweighed by a $166.5 billion increase in spending, driven by Social Security, Medicare, and Medicaid, and interest on debt held by the public (net interest). Debt held by the public rose as a share of gross domestic product (GDP), from 74 percent at the end of fiscal year 2015 to 77 percent at the end of fiscal year 2016. This compares to an average of 44 percent of GDP since 1946.

The 2016 Financial Report, the Congressional Budget Office (CBO), and GAO projections all show that, absent policy changes, the federal government’s fiscal path is unsustainable and that the debt-to-GDP ratio would surpass its historical high of 106 percent within 15 to 25 years (see figure). 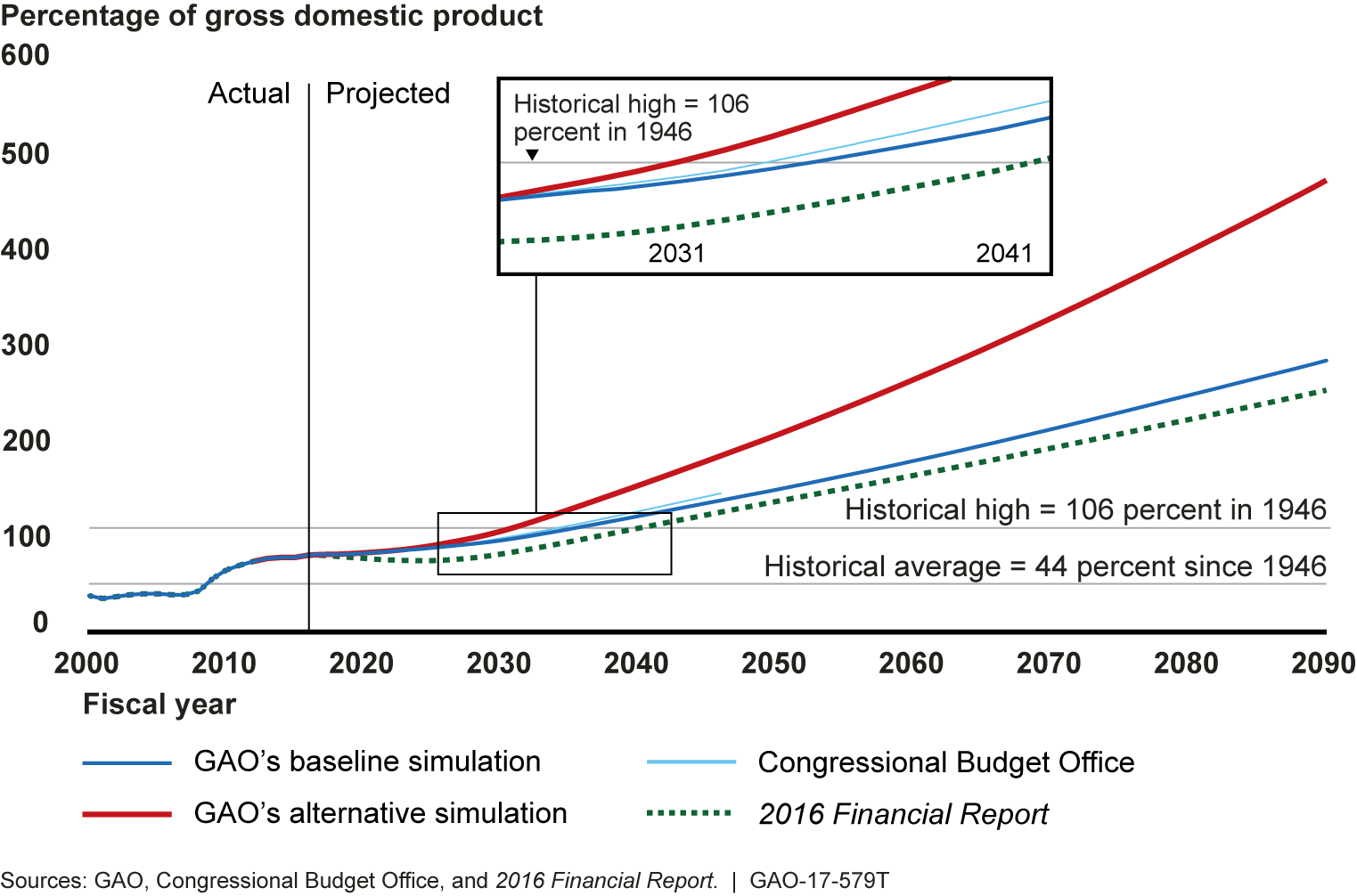 Of further concern is the fact that none of the long-term projections include certain other fiscal risks that could affect the federal government’s financial condition in the future. Some examples of such fiscal risks are the Pension Benefit Guaranty Corporation’s funding and governance structure, U.S. Postal Service’s retiree health and pension funds, government insurance programs such as the National Flood Insurance Program, and military, economic, financial, or weather-related crises.

Importance of Early Action: The 2016 Financial Report, CBO, and GAO all make the point that the longer action is delayed, the greater and more drastic the changes will have to be. As shown in the timeline, the trust funds face financial challenges that add to the importance of beginning action. It is important to develop and begin to implement a long-term fiscal plan for returning to a sustainable path.

Opportunities to Begin to Address the Government’s Fiscal Health

GAO has identified actions Congress and agencies can take now to help improve the fiscal situation. GAO highlighted five agencies—the Departments of Defense, Health and Human Services, and Veterans Affairs; the Social Security Administration; and the Office of Management and Budget. These agencies made up 69 percent—$ 3.0 trillion—of federal outlays in fiscal year 2016. Although these actions alone cannot put the federal government on a sustainable fiscal path, they would improve both the fiscal situation and the federal government’s operations.

The Congress and administration face serious economic, security, and social challenges that will require difficult policy choices in the short term about the level of federal spending and investments as well as ways to obtain needed resources. At the same time, the federal government is highly leveraged in debt by historical norms.

In addition to near term financing decisions, a broader fiscal plan is needed to put the government on a more sustainable long-term path. In January 2017, GAO reported on the need for such a plan by outlining the fiscal condition of the U.S. government and its future path based on current fiscal policies. This statement summarizes GAO’s work on this issue and also discussed how Congress and executive branch agencies can help in the near term by taking action to address improper payments; duplication, overlap, or fragmentation; high-risk areas; and the tax gap.