NNSA manages research and technology development projects intended to help stop nuclear proliferation. What does it have to show for its $1 billion investment on these projects in fiscal years 2012–2015? There has been progress, but NNSA hasn't tracked or documented results consistently.

We looked at a sample of 91 projects. Of those, 88 had made technological progress by, for example, building instrument hardware. Of those, 33 were transitioned to users for further development or use, and 17 of those are currently in use. We recommended that NNSA consistently track and document its project results. 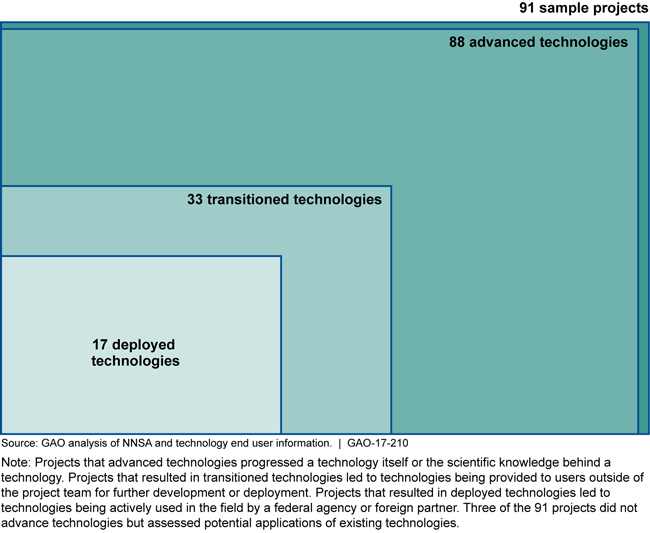 The full extent to which research and technology development projects managed by two programs in the National Nuclear Security Administration's (NNSA) Office of Defense Nuclear Nonproliferation (DNN) have resulted in advanced (progressed technologies or science supporting them), transitioned (provided to users for further development or deployment), or deployed (used in the field) technologies is unclear because NNSA does not consistently track and document all of these outcomes. Specifically, the DNN Research and Development (DNN R&D) and Nonproliferation and Arms Control (NPAC) programs track and document technology advancements resulting from their projects, such as in project reports. However, NNSA officials acknowledged that DNN R&D—by far the larger program—does not consistently track and document whether its projects result in technologies transitioned to or deployed by end users. In contrast, the NPAC program tracks and documents these project outcomes. By not consistently tracking and documenting technology transition and deployment outcomes, NNSA is unable to demonstrate the full results of its projects. GAO gathered information from various sources on a sample of 91 projects. Of these, 88 projects advanced technologies by, for example, building instrument hardware or developing models for data analysis; the other 3 did not advance technologies but assessed potential applications of existing technologies. Among the 88 projects that advanced technologies, 33 also resulted in technologies being transitioned, including software used to analyze nuclear detonations. Finally, of these 33 projects, 17 also resulted in deployed technologies, including an enrichment monitoring tool used in Iran and space-based nuclear detonation sensors. Reasons that some technologies in the sample did not move beyond the advancement or transition stage included that the technology needed further development or evaluation before being used.

Limitations with the clarity of the DNN R&D program's publicly reported performance measures make them difficult to interpret, potentially hindering users' ability to determine the program's progress; better documentation of project performance against baseline targets may enhance NNSA's performance assessments. The DNN R&D program's performance measures have clarity limitations because they do not, for example, define measurement criteria or provide context justifying how the program determined that it met its performance targets; this may cause external users of the measures, including Congress, to have difficulty interpreting NNSA's assessment of performance. In a December 2011 report, GAO recommended that NNSA clarify its publicly reported measures for DNN's R&D program. GAO continues to believe that NNSA should do so. Regarding project-level performance, NNSA uses project plans to establish baseline targets for projects' scope and completion date, and tracks progress by communicating with project managers and reviewing documents such as quarterly and final project reports. However, NNSA officials said that final project reports do not document their assessment of performance against baseline targets and that there is no common template for final project reports, which GAO confirmed in a review of several final project reports. Documenting such assessments could enhance NNSA's ability to assess project performance against goals, consistent with federal internal control standards.

A House report included a provision for GAO to review the programs. This report evaluates, among other objectives, (1) the extent to which projects managed by NNSA's research and technology development programs resulted in advanced, transitioned, or deployed nonproliferation technologies and (2) how NNSA measures the performance of its research and technology development programs and projects.

GAO reviewed documents on a non-generalizable sample of 91 research and technology development projects, selected from all program areas to include projects with the largest amount of funding and to capture a broad range of the programs' technical functions. GAO also reviewed DNN's program objectives and publicly reported performance measures and interviewed NNSA officials and technology users at other agencies.

Explore our Key Issues on Energy