GAO found that the Office of Management and Budget (OMB) and the Department of the Treasury (Treasury) have taken steps to assure the quality of the federal spending data that will be made available to the public under the Digital Accountability and Transparency Act of 2014 (DATA Act). These steps include creating a broker system to (1) check that submitted data follow a standardized format that will allow for aggregation and comparison across government and (2) validate selected data elements to ensure that the data are accurate. See figure 1 for how the broker system operates. Treasury plans to release a full production broker system in the fall of 2016. According to Treasury documents, once fully implemented, the broker system will apply a series of format and formula checks to the budget and financial data submitted by the agencies to ensure that the data are in the required standard format and correctly calculated. The broker will also validate budget and financial data by comparing them to multiple sources. While the broker system is designed to extract and standardize the format of data from existing award reporting systems, it will not validate these data to ensure that they are accurate. GAO’s prior work has identified persistent challenges with the quality of these data. OMB has directed agencies to use existing quality assurance processes and controls to assure the quality of data reported under the DATA Act.

On April 29, 2016, Treasury released DATA Act Information Model Schema version 1.0—4 months later than originally planned. Federal enterprise resource planning vendors such as Oracle told GAO that they waited to start developing key software patches until a stable version of the schema was released. According to Treasury officials, the patches are needed by some agencies to facilitate agency data submissions from their existing financial management systems and are planned to be released no later than February 2017. They also noted that, beginning in the fall of 2015, Treasury officials regularly engaged with federal enterprise resource planning vendors to ensure they updated their products to be aligned with the schema version 1.0 in an effort to minimize implementation costs to federal agencies. It is unclear the extent to which agencies will need to test and customize these patches before they submit data to Treasury as required by the DATA Act by May 2017. GAO will continue to monitor this issue as part of its on-going work. 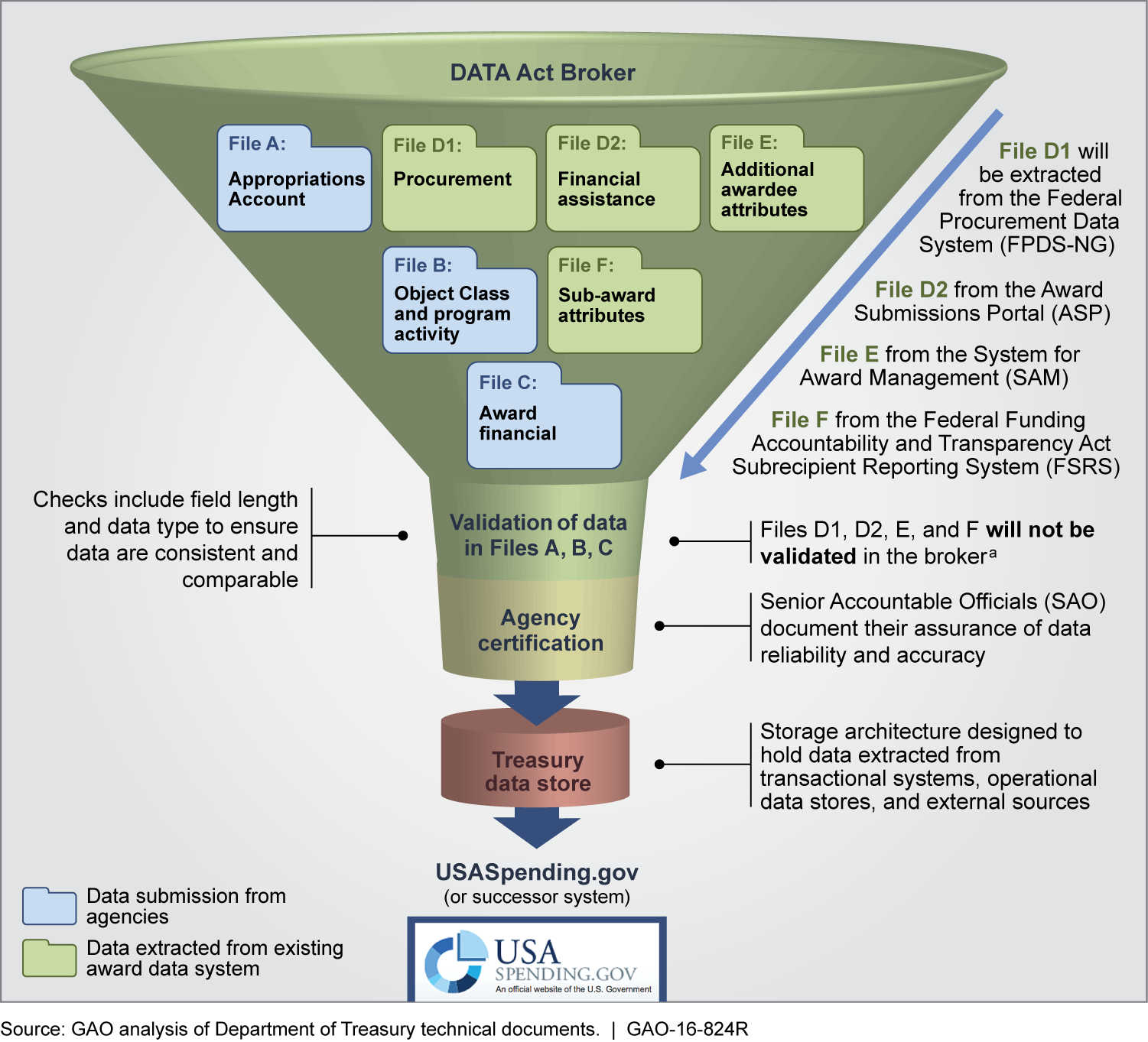 aAccording to OMB staff and Treasury officials, although the data in these files are not validated by the broker they are subject to checks by their source systems.

This is the latest work in response to a mandate for GAO to assess DATA Act implementation efforts to improve the transparency and accuracy of data on the approximately $3.7 trillion spent annually by the federal government. A key component of ensuring the accuracy, completeness, and consistency of federal spending data is Treasury’s development of technical guidance and OMB’s release of related policy guidance for submission and publication of the data. Treasury has issued technical implementation guidance which establishes the technical format and supporting systems to facilitate agency reporting. With less than a year before agencies will be required to report data in accordance with the act, there is limited time to complete technical changes and adjustments to facilitate effective implementation. This report provides an update and initial observations on the status of efforts by Treasury and OMB regarding technical implementation of the DATA Act.

This report describes (1) the development of a DATA Act Broker system and (2) the components of the technical guidance for agencies’ data submissions, known as the DATA Act Information Model Schema (DAIMS) version 1.0. GAO will provide additional information on the technical implementation of the act including the extent to which the broker addresses data quality issues and the role the DAIMS version 1.0 is expected to play in agencies’ implementation efforts in a forthcoming report planned for later this year.

To understand Treasury’s processes for developing the technical guidance, GAO reviewed applicable technical guidance and documentation related to the broker system and the schema version 1.0. In addition, GAO observed two demonstrations of how agencies submit their data to a prototype of the broker and the feedback produced by the system regarding data verification. GAO also interviewed officials from OMB, Treasury, and selected federal agencies and inspectors general, as well as enterprise resource planning vendors assisting federal agencies with technical implementation. To obtain information on agencies’ use of the technical guidance, GAO selected three agencies—the Department of Health and Human Services (HHS), the Department of Agriculture (USDA), and the Corporation for National and Community Service (CNCS)—based on whether they were in compliance with existing federal requirements for federal financial management systems, the type of federal funding provided (such as grants, loans, or procurements), and their status as a federal shared service provider for financial management. At each agency, GAO reviewed DATA Act implementation plans and interviewed officials responsible for the implementation including the designated senior accountable official and other staff.