For the 2020 Census, the U.S. Census Bureau (Bureau) plans to implement several innovations, including new IT systems. The challenges associated with successfully implementing these innovations, along with other challenges, puts the Bureau’s ability to conduct a cost-effective census at risk. 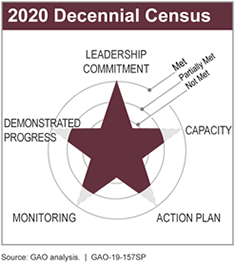 The 2020 Decennial Census was first added in 2017 as a high-risk area. Since then, the Bureau has met the criterion for leadership commitment and made progress on the other four criteria.

Leadership commitment: met. The Bureau and the Department of Commerce have strengthened this area with executive-level oversight of the 2020 Census by holding regular meetings on the status of IT systems and other risk areas. In addition, in 2017 the Department of Commerce designated a team to assist senior Bureau management with cost estimation challenges. Moreover, on January 2, 2019, a new Director of the Census Bureau took office, a position that had been vacant since June 2017; and in June 2018 the once-vacant Deputy Director position was filled.

Capacity: partially met. To enhance the capacity of its Decennial Directorate, the Bureau brought in new leadership in October 2017 with significant experience in program execution. The Bureau also improved the cost estimation process of the decennial when it established guidance including:

However, the Bureau continues to experience skills gaps in the government program management office overseeing the $886 million contract for integrating the IT systems needed to conduct the 2020 Census. Specifically, as of November 2018, 21 of 44 positions in this office were vacant. These vacant positions add risk that the office may not be able to provide adequate oversight of contractor cost, schedule, and performance.

Action plan: partially met. In December 2018, the Bureau issued an updated operational plan for the 2020 Census that laid out risks, decisions made, issues to be resolved, and related milestones for each of its major operations. However, the 2020 Census schedule lacks a risk assessment and certain other best scheduling practices, which affects its overall reliability. In addition, during the 2018 End-to-End Test we found the Bureau’s data management reporting system did not always provide accurate information because of a software issue. As a result, Bureau staff had to rely on multiple systems to manage field operations, making monitoring inefficient.

Monitoring: partially met. The Department of Commerce holds biweekly meetings with Bureau leadership to discuss the status of 2020 Census operations, including our open recommendations. To track performance of decennial census operations, the Bureau relied on reports to track progress against pre-set goals for a test conducted in 2018. According to the Bureau, these same reports will be used in 2020 to track progress.

The Bureau has also taken steps to improve its cost estimation process for 2020; however, it needs to implement a system to track and report variances between actual and expected cost elements. Further, the Bureau’s schedule for developing IT systems during the 2018 End-to-End Test experienced delays that compressed the time available for system testing, integration testing, and security assessments. These schedule delays contributed to systems experiencing problems after deployment, as well as cybersecurity challenges. For example, as of December 2018, the Bureau had identified nearly 1,100 system security weaknesses that needed to be addressed.

Demonstrated progress: partially met. According to Department of Commerce officials, in the summer of 2018, the Bureau began conducting an analysis of oversight recommendations, including ours, to determine the root cause of shortfalls and set a timeline for addressing those recommendations and related root causes. We have standing quarterly meetings with Senior Bureau officials to discuss the status and expected actions for our open recommendations related to the 2020 Census. We also periodically meet with the Under Secretary for Economic Affairs to discuss the Department of Commerce’s oversight of the decennial census.

While these actions and others are important steps forward, we found that the Bureau scaled back testing of new innovations in 2017 and 2018. Specifically, the Bureau cancelled the field portion of the 2017 test and then conducted a full operational test in only one site—Providence County, Rhode Island—instead of three test sites as originally planned. Moreover, the Bureau did not test all 2020 Census systems and IT capabilities during its operational test. Not fully testing innovations and IT systems as designed, increases the risk that innovations and IT systems will not function as intended during the 2020 Census.

The U.S. Census is mandated by the Constitution and provides vital data for the nation. Census data are used, among other purposes, to apportion the seats of the U.S. House of Representatives; redraw congressional districts in each state; and allocate billions of dollars each year in federal financial assistance.  Further, businesses use census data to market new services and products, and to tailor existing ones to demographic changes.

The Bureau is seeking to control the cost of the census, which has been escalating with each decade. The 2020 Census is now estimated to cost approximately $15.6 billion. Moreover, the average cost for counting a housing unit increased from about $16 in 1970 to around $92 in 2010 (in 2020 constant dollars), in part because the nation’s population is  more difficult to count.

The Bureau is also implementing several new innovations that require managing the processes of acquiring and developing new and modified IT systems. In addition, because the 2020 Census involves collecting personal information from over a hundred million households, it will be important that the Bureau addresses system security weaknesses in a timely manner, and that risks are at an acceptable level before systems are deployed.

In 2017 and 2018, we testified in five congressional hearings focused on the progress of the Bureau’s preparations for the decennial census. Going forward, continued congressional oversight will be needed to ensure decennial efforts stay on track, the Bureau has needed resources, and Bureau officials are held accountable for implementing the enumeration as planned.

We depend on the nation’s critical infrastructure—such as the systems that provide energy...
Nick Marinos
Director
MarinosN@gao.gov
(202) 512-9342