Similar to how new flu shots come out each year to combat new strains of the virus, agencies must routinely adapt their cybersecurity efforts to address evolving threats.

In today’s WatchBlog, we look at the federal government’s approach to and strategy for securing its systems.

Read on and listen to our podcast with Greg Wilshusen, a director in our Information Technology and Cybersecurity team, to learn about what has been done and what needs to be improved.

While federal agencies have gotten better at preventing and detecting intrusions into their systems, they are still vulnerable to attacks such as unauthorized computer invasions. In FY 2017, for instance, federal agencies reported more than 35,000 cybersecurity incidents. 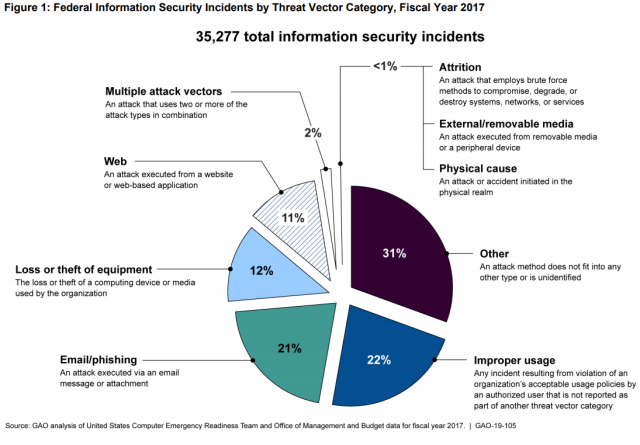 Why is federal cybersecurity important?

When you step back to think about the vast amount of sensitive information the government maintains, it becomes apparent why cyberattacks pose a serious threat to our economic, national, and personal privacy and security. For example:

In some respects, agencies are doing a better job at protecting against cyberattacks than before the 2015 Office of Personnel Management data breach.

However, most agencies still don’t have an effective approach to securing their systems. For example, inspectors general at 17 of the agencies we reviewed in our recent report said that their information security programs weren’t effective enough.

We’ve made more than 3,000 recommendations to agencies since 2010 related to cybersecurity shortcomings. Although many of these recommendations have been addressed, approximately 600 had not been implemented as of March 2019.

We recently recommended that DHS and the Office of Management and Budget help agencies improve their intrusion detection and prevention capabilities by, among other things, identifying what obstacles and impediments affect their ability to detect and prevent intrusions.

We also have plans to further assess the adequacy and effectiveness of federal agencies’ information security programs.