The United States faces a highly challenging fiscal future. Absent change in policy, the federal fiscal path is unsustainable—debt is growing faster than the economy (GDP). This springs from the continuing gap between the amount of money the federal government collects in revenue, and the amount it spends—i.e., the federal deficit.

Today we issued an update on the fiscal condition of the U.S. government as of the end of FY 2017—and its likely fiscal future if policies don’t change.

The WatchBlog explores the nation's fiscal health. Listen to our podcast with Susan Irving, our expert on debt and fiscal issues, then read on for more.

Staying in the red

The 2017 Financial Report, CBO, and GAO projections all show that, without policy changes, debt will continue to grow faster than the economy.

Debt held by the public—money the government has borrowed by selling Treasury bills, notes, and bonds—was 76% of the gross domestic product (the economy) at the end of fiscal year 2017.  If nothing changes, that ratio will surpass its historical high of 106% within 14 to 22 years. 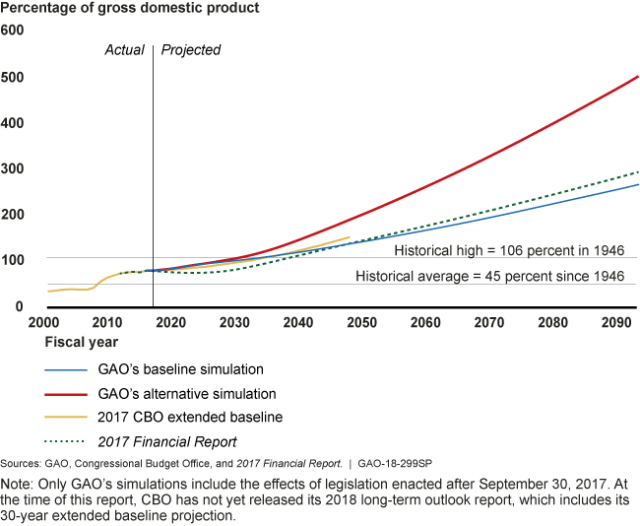 The challenge facing policymakers is not any single year’s deficit increase—it’s the outlook for future years. Health care costs, Social Security, and interest on the debt are all driving spending growth going forward. 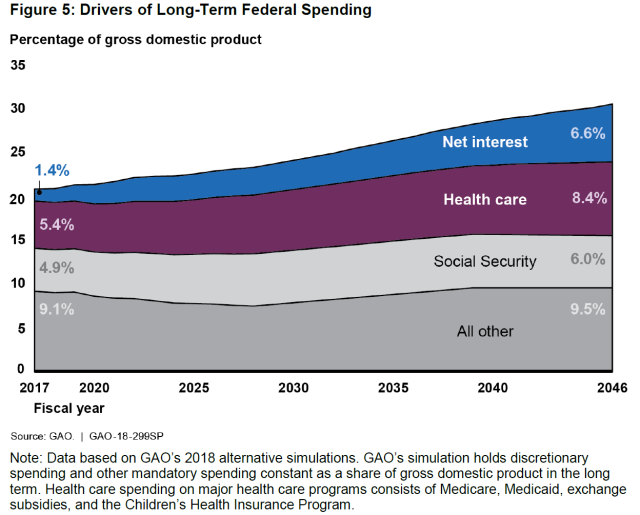 Under our simulation, absent any policy changes, interest becomes the largest single claim on the federal budget—exceeding 25% of all spending in 2059.

The timeline below shows that key Medicare and Social Security trust funds are projected to face major financial challenges.

It’s clear that the federal government is going to have to make some tough choices in the near future. It is important to develop and begin to implement a long-term fiscal plan for returning to a sustainable path. The longer action is delayed, the greater and more drastic the changes will have to be.

While changes to Social Security, health care, and interest require legislative actions to alter fiscal policies, federal agencies can still play a role in improving the nation’s fiscal health. Over the years, we’ve identified a number of things federal agencies can do, such as:

These kinds of actions will help—both with responsible stewardship of taxpayer funds and with the nation’s financial condition. However, federal agencies alone cannot put the nation on a sustainable fiscal path.

Check out our February 2018 video explaining the nation’s financial condition and future, and ways to improve it.

Visit our website to learn more about America’s fiscal future.