The issue of who gets disciplined and why is complex.  In some cases teachers are the ones who choose when and how to discipline students—particularly for common behaviors like disobedience, defiance, and classroom disruption. Research sheds some light on a variety of possible factors—including stereotypes or unconscious bias—that can cause some teachers to judge a student’s behavior differently based on their race and sex.

We found that Black students, boys, and students with disabilities were disproportionately disciplined in K-12 public schools across the country in 2013-14—regardless of the type of disciplinary action, level of school poverty, or type of public school. Today’s WatchBlog explores our latest report on discipline disparities in schools.

To carry out this work, we looked at the 6 broad discipline categories for which the U.S. Department of Education collects data: (1) out-of-school suspensions, (2) in-school suspensions, (3) referrals to law enforcement, (4) expulsions, (5) corporal punishment, and (6) school-related arrests. We analyzed data from nearly every public school by student demographics (e.g., race, sex, disability) and school type (e.g., magnet or charter). We also developed a regression model to explore whether certain school characteristics, such as the poverty level of the school, were associated with higher rates of discipline.

Boys accounted for just over half of all public school students, but made up about two-thirds of students disciplined across each of the six actions.

And students with disabilities made up about 12 percent of all public school students, but accounted for about 25 percent of students referred to law enforcement, arrested for a school-related incident, or suspended from school. 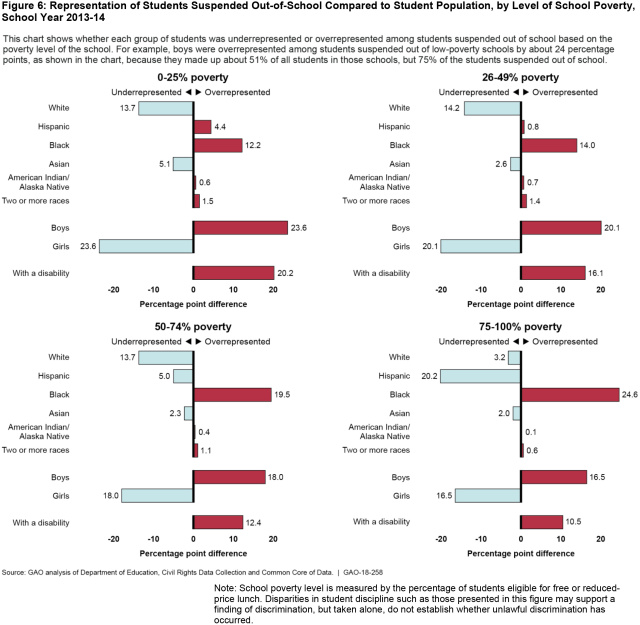 No matter if the public school was a charter, traditional, alternative or special education school, Black students, boys, and students with disabilities were disciplined at higher rates. 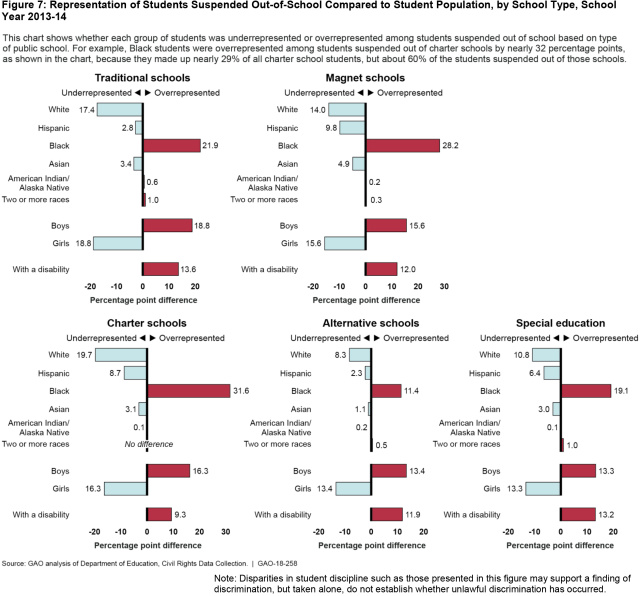 These findings are part of a series of work we have done examining issues related to race and poverty in public schools. For example, we’ve found that between school years 2000-01 and 2013-14, the percent of K-12 public schools with high proportions of poor and Black or Hispanic students had increased from 9 percent to 16 percent. And, we found that the 8.4 million largely poor, Black or Hispanic students attending these schools in school year 2011-12 had disproportionately less access to math, science, and college preparatory courses. Based on our findings, we made recommendations to the Department of Education and the Department of Justice’s Civil Rights Division to help them identify patterns and address the disparities in schools.

In another report focused on schools in Washington, D.C., we found that, although suspensions and expulsions from D.C. charter schools dropped from school years 2011-12 through 2013-14, their rates remained about double the rates of charter schools nationally and slightly higher than D.C. traditional public schools and were also disproportionately high for some student groups and schools. We recommended that D.C. education agencies collaborate on a plan to further reduce discipline rates.