Abandoned and derelict recreational boats, fishing boats, and barges can block U.S. waterways and pose threats to the environment and public health—as fuel and hazardous material can leak into the water when these boats and other types of vessels deteriorate. So who’s in charge of responding to these types of incidents? The answer depends on the nature and location of the incident.

Earlier this year we looked at actions federal and state agencies have taken to address abandoned vessels. Today’s WatchBlog explores some of what we found.

Causes of abandonment and dereliction

Severe weather events, financial hardships, and the potentially high costs for owners to properly remove boats and barges from waterways all increase the likelihood that they’ll be abandoned.

For example, some owners may abandon their boats if they can no longer afford to care for them or pay for their disposal. 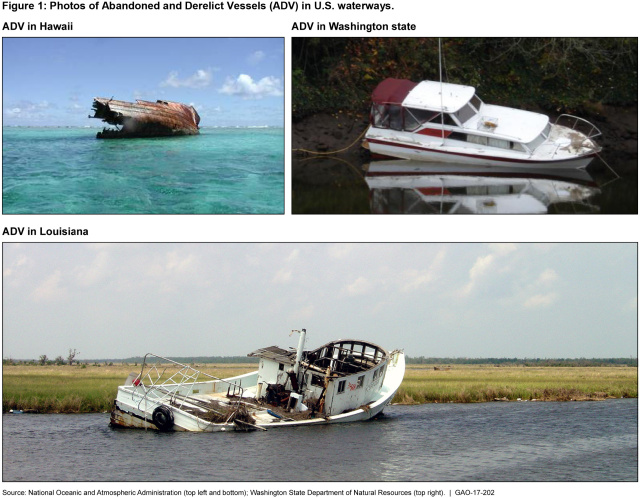 Multiple federal agencies are responsible for responding to resulting marine pollution or navigational threats—depending on the location and nature of the incident.

For example, the Coast Guard is responsible for removing pollution emanating from boats in the coastal zone, whereas the EPA has this authority inland. And when it comes to a presidentially-declared major disaster or emergency, FEMA takes the lead in coordinating the federal response. 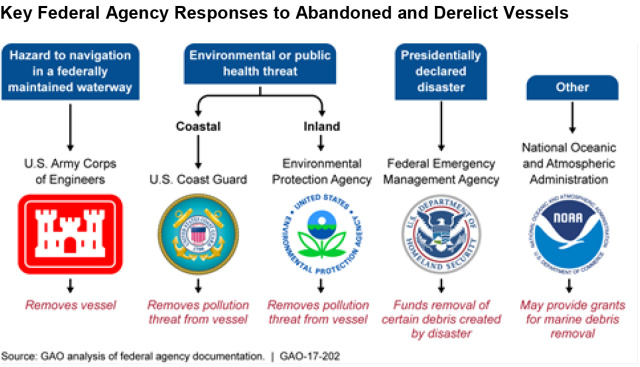 That said, federal agencies told us that they generally did not have funding to support actions beyond responding to vessels posing navigation, pollution, or public health threats, nor were they required to do so by federal law or agency policy. For example, although the Abandoned Barge Act provides the Coast Guard with authority to levy fines for owners who abandon barges, officials reported there was no funding to support efforts to identify and track down these owners.

We surveyed 28 coastal states about their responses to such boats and other vessels, and half reported having state run programs that conduct activities aimed at preventing, responding to, and removing them. States reported various funding mechanisms for these programs, such as legislative-appropriated budgets, vessel registration fees, and federal grants.

Eighteen of these states reported identifying a total of 5,649 abandoned vessels between 2013 and 2016 and removing 3,034 of them. 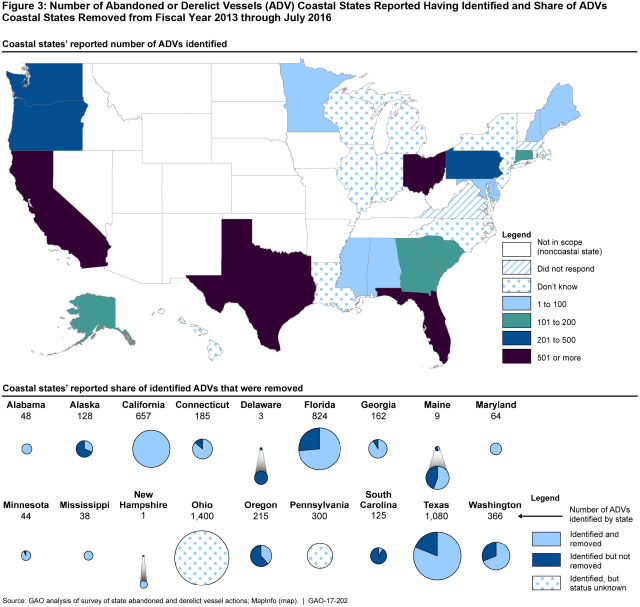 States reported that they faced various hurdles when responding to abandoned boats and other vessels. For example, some officials reported challenges in responding to abandoned boats due to state laws or policies they considered to be vague or inadequate. And many state officials cited insufficient funding as a challenge. Certain states also shared concerns about federal actions taken to address these incidents, including the Coast Guard’s practice of removing the pollution threat from boats, and then leaving them in waterways.

To learn more about federal and state responses to abandoned and derelict boats and other vessels, check out our full report. The COVID-19 pandemic has caused economic turmoil and resulted in unprecedented federal spending to...