Our staff are in the field this week observing the Census Bureau’s last complete test of operations before the 2020 Census. The “End-to-End Census Test” is the culmination of the Bureau’s research and planning efforts over the past decade to improve how it administers the census.

We’ve taken a look at these planning efforts in some recent reports, and today’s WatchBlog explores what we’ve found.

Risks and rewards
As we’ve mentioned in previous blog posts, the Bureau is planning to implement several new innovations that could cut costs for the 2020 Census by about $5.2 billion.

However, while these innovations may hold down costs, we found that they also introduce some risks—which is why we added the 2020 Census to our 2017 High Risk List, which discusses, among other things, federal areas in need of broad-based transformation to improve operations.

During past census operations, the Bureau would hire people to walk almost every street in the country to update its maps and identify addresses—a huge and costly endeavor. This is partly because residences can be hidden, such as basement or garage apartments. 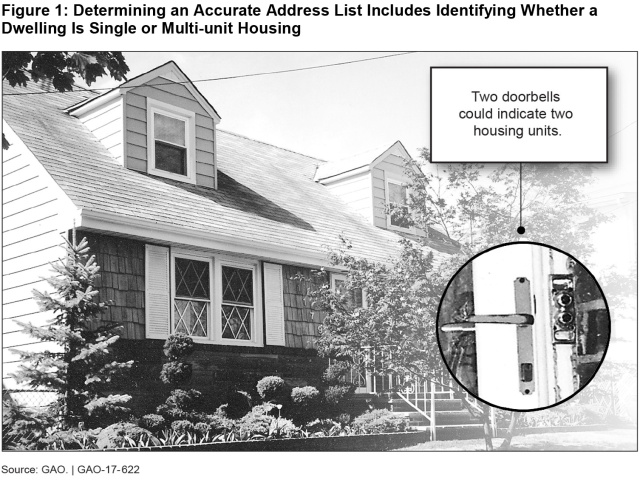 For the 2020 Census, the Bureau is planning to replace much of this door-to-door operation with street and satellite imagery. However, it has not evaluated the accuracy of this approach, which involves comparing aerial and street-level images to data in its master address list. The Bureau also suspended its plan to resolve address mismatches using “in-office” procedures—which will mean more door-to-door work—without detailing the cost, value, or accuracy of doing so.

The Bureau is also using administrative records, such as applications for government services like food stamps or disability benefits, to help reduce expensive follow-up visits for those people who do not respond to census requests. However, these records may not always be complete and accurate, so the Bureau has developed a process to determine whether potential administrative records are reliable enough to use.

It also plans to test additional applications of these records for the first time during this trial—for example, to decide whether they can help detect fictitious census responses.

Finally, the Bureau plans to rely on dozens of new and legacy IT systems to administer the 2020 Census. But we’ve reported that the Bureau has had trouble getting these systems up and running, including issues managing internal coordination, schedules, and costs. It also needs to address several security risks that could compromise these IT systems (and their sensitive data).

This dress rehearsal will be crucial in determining problems and developing solutions as the Bureau moves into the final stretch in designing the 2020 Census. We will be monitoring this test, collecting data, and reporting back. So stay tuned!