Wildfires are a natural and inevitable part of many healthy ecosystems, but they also burn millions of acres each year, cost billions of dollars to combat, and can have devastating effects on communities—including destruction of property and even death. The size and intensity of wildfires across the country have increased in recent years, in part as a result of dense vegetation, drought, and other climate stressors, while at the same time, more people are choosing to live in fire-prone locations.

And although we hate to disagree with Smokey Bear’s admonition that “only you can prevent wildfires,” multiple federal and nonfederal stakeholders have roles to play in reducing the risk from wildland fires. Today’s WatchBlog explores our recent review of how these stakeholders are working together to reduce wildland fire risk to communities.

Collaboration is key to reducing wildland fire risks to communities

Because wildfires can cross jurisdictions, actions to reduce wildfire risks involve collaboration among multiple stakeholders—including federal land management agencies, state and local governments, Indian tribes, homeowners, and others. As shown below, these groups work together in a variety of ways to reduce the risk of wildfires before they occur, including fuel reduction, fire preparedness, prevention, and education activities. 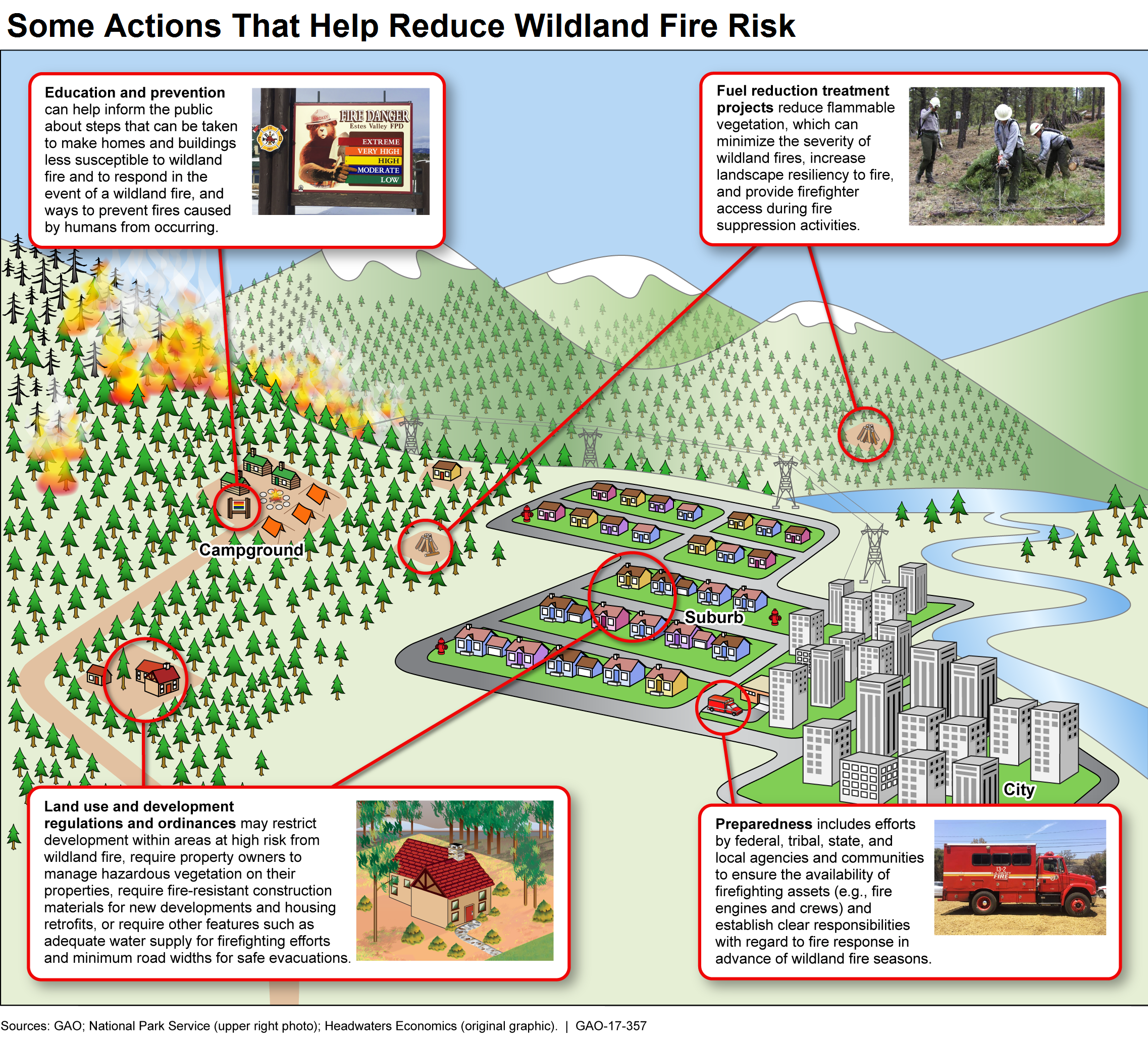 We asked various stakeholders about what factors they saw as enhancing (or hindering) these joint activities.

Federal legal authorities, agency collaboration resources, and joint community-level planning were all seen as positive factors. For example, many cited the Good Neighbor Authority as enhancing collaboration by giving federal and nonfederal entities the authority to work across jurisdictions on actions to reduce wildfire risk—such as hazardous fuel reduction projects. Similarly, stakeholders cited agencies’ collaboration resources, such as the U.S. Forest Service’s State Fire Assistance program and the Department of the Interior’s assistance aimed at rural fire districts, as being helpful. However, some stakeholders said that the difficulty in sharing costs for joint projects can hinder collaboration.

Several also pointed to the 2014 National Cohesive Wildland Fire Management Strategy as encouraging collaboration. The Cohesive Strategy—developed with input from all levels of stakeholders—is a comprehensive framework to coordinate multiple federal and nonfederal efforts toward three goals:

We also discussed what might be done to further reduce wildfire risk to communities.

Some suggested that more states could adopt laws requiring property owners to take risk-reducing actions, such as using fire-resistant building materials or reducing vegetation around their homes. Many suggested that the Cohesive Strategy could be implemented more effectively.

Among other things, we found that the interagency council charged with overseeing and implementing the Cohesive Strategy hadn’t developed measures to evaluate the extent to which national fire management goals were being met. We recommended the Forest Service and Interior work with the council to do so.