Today’s WatchBlog looks at another GAO report—in this case, regarding FBI’s firearm background check system and domestic violence records. We examined this issue at the request of Congress, and today we share some of what we found about the National Instant Criminal Background Check System (NICS), and the challenges of conducting checks that involve domestic violence records.

How do background checks work?

Federally licensed firearm dealers run background checks—which are supposed to help keep guns out of the hands of people with domestic violence records and others who are disqualified by law from possessing firearms. Under federal law, there are generally 10 categories of people who are prohibited from receiving or possessing a gun, including people convicted of domestic violence and subject to a domestic violence-related protection order. The background check is intended to ensure that the buyer isn’t in one of the prohibited categories.

When a person buys a gun from a federally-licensed dealer, the dealer generally must request a background check through NICS before they can sell the gun. The buyer provides their name, date of birth, and other descriptive information, which is used to search for records that would prohibit the gun sale. 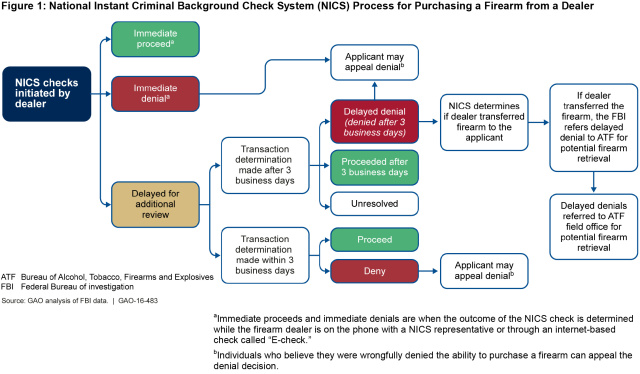 How long do they take?

The FBI completes the majority of background checks within 3 business days. However, some checks can take longer. Under federal law, if the check is not completed within 3 business days, the dealer may sell the gun to the buyer while the FBI continues researching records (unless state law provides otherwise).

If the FBI eventually determines that the buyer is prohibited from having a gun, then the Bureau of Alcohol, Tobacco, Firearms and Explosives may need to retrieve any guns that have already been sold to the buyer.

We spoke with FBI and state officials, and found a number of challenges that could delay a background check involving domestic violence records:

Information difficulties. The FBI may need to obtain information from local agencies. Older criminal records can be especially difficult because they are only available on paper or have been destroyed, and officials from one state said it can take over a week to retrieve the necessary documents.

States and the Department of Justice have already taken some actions to make records more readily available for background checks. We also made a recommendation that the FBI should monitor how long it takes to complete background checks, especially for each category. The DOJ then could prioritize their assistance efforts to states to focus on the categories, such as domestic violence convictions, that take longer to completely research during a background check.