These days, when you turn on the news you almost always see another hack, leak, or breach putting sensitive information at risk. But we’ve been focusing on keeping federal agency information systems secure for a long time. For October’s Cybersecurity Awareness Month, the WatchBlog takes a look at federal cybersecurity challenges.

What is the threat?

Cybersecurity incidents can pose serious challenges to personal privacy and security as well as the economy and national security.

The breach at the Office of Personnel Management that was first reported in July 2015 is a good example of both. At least 21.5 million individuals had their personal data leaked, leaving them vulnerable to identity theft, fraud, and security threats. As most of the affected individuals were also government employees—many of whom are entrusted with sensitive or classified information—the breach was also a matter of national security.

And the number of reported information security incidents at federal agencies is growing—up more than twelvefold from 2006 through 2015. 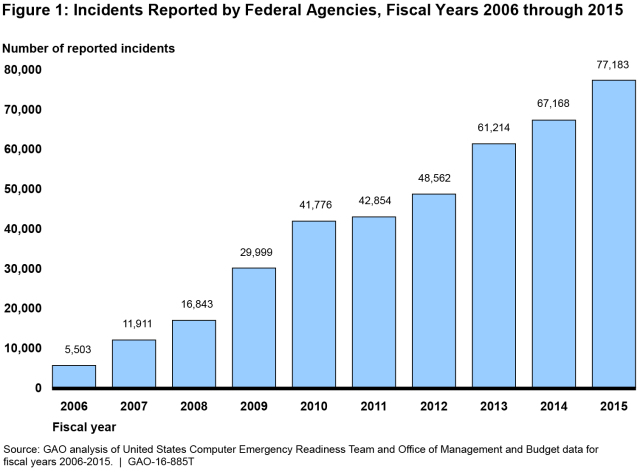 Who’s behind all these incidents?

The threats to federal IT systems and networks come from a variety of sources and vary in terms of the types and capabilities of the actors, their willingness to act, and their motives. Here are some of the likely perpetrators:

Our survey of federal agencies found that the 18 agencies with “high-impact systems” (i.e., those that hold sensitive information, the loss of which could cause catastrophic harm) identified cyber attacks from nations as the most serious and most frequently-occurring threat. 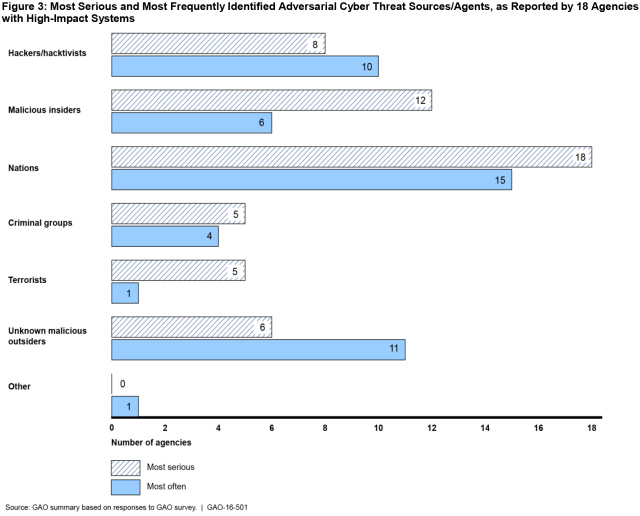 Why can’t agencies stop the attacks?

Several laws and policies establish a framework for how the federal government should protect its information systems. However, we reported that agencies are not consistently implementing the framework, and additional actions are needed. For example, agencies should

So why isn’t this happening? The 24 agency Chief Information Security Officers we surveyed frequently cited these hurdles to overseeing information security activities:

Over the past several years, we have made about 2,500 recommendations aimed at strengthening agencies’ information security programs and controls. It will take coordinated effort across the government, with strong strategic direction from the White House and effective oversight, to make sure that federal agencies are taking all the necessary steps to protect our nation’s systems and information.