The federal prison population has grown from about 25,000 in 1980 to approximately 193,000 in August 2016. This expansion comes with substantial associated costs: housing, food, security, and medical care for each prisoner can cost $66 to $101 per day, depending on the security level of the correctional facility. To cover these costs, Congress gave the Bureau of Prisons almost $7.5 billion in funding for fiscal year 2016.

The Department of Justice has taken steps to slow the growth of the federal prison population by pursuing alternatives to incarceration. Today’s WatchBlog takes a closer look at some of these alternatives.

What are the alternatives?

In the criminal justice system, there are several steps at which alternatives to federal prison may be available. For example, before trial, certain offenders may be diverted from the traditional criminal justice process into a program of supervision and services or court-involved diversion practices that may provide offenders an opportunity to avoid incarceration if they satisfy the program requirements. These are referred to as “pretrial diversion” programs.

In the sentencing phase, prosecutors, judges, and judiciary officials told us several factors affect whether they decide that federal prison is the right choice for an offender. Among other things, the officials look at the offender’s criminal history, particularly whether there is a history of violence, as well as the offender’s role in the specific crime.

After an offender is sentenced to incarceration and sent to the Bureau of Prisons, BOP can place eligible inmates into facilities such as residential reentry centers (also known as halfway houses) and home confinement (house arrest). BOP officials consider legal requirements and risk levels, among other things, when deciding whether to place an inmate in a halfway house, under house arrest, or into other alternatives. 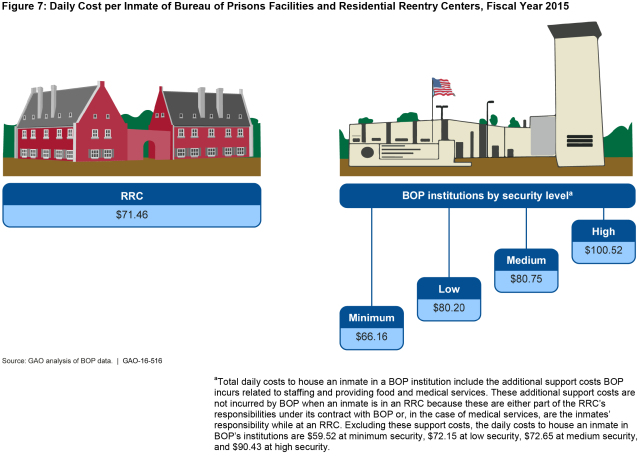 Alternatives can be cheaper, but do they work?

While these alternatives may be less expensive than imprisonment, we found that DOJ wasn’t measuring outcomes as well as it could. For example, DOJ surveyed U.S. Attorneys in 2014 and 2015 to get information about the use of certain pretrial diversion practices—but didn’t collect data on outcomes or costs.

And it’s those outcomes—such as successful reentry into society and reduced recidivism (relapse into criminal behavior)—that could be key in reducing the federal prison population. We recommended that DOJ monitor performance and focus more on costs and outcomes of pretrial diversion and other alternatives such as halfway houses and house arrest.

For more on the costs of prison, alternatives to incarceration, as well as the number of Bureau of Prisons inmates by security level, check out our full report.