Skip to main content
In movies and television shows, law enforcement agencies use automated face recognition to find suspects and solve crimes. Does it work that way in real life? Not quite—as Diana Maurer, a director in our Homeland Security and Justice team, explains in this podcast: Even so, law enforcement is still using this tech for investigative leads. Today’s WatchBlog examines the FBI’s use of face recognition technologies. Millions and millions of photos The FBI operates the Next Generation Identification-Interstate Photo System—a face recognition service that allows law enforcement to search a database of more than 30 million photos to support criminal investigations. Law enforcement users can submit search requests to help identify an unknown person using, for example, a photo of a suspect from a surveillance camera. The system can then generate a list of 2-50 possible matches, depending on how many results the user requests.

The FBI operates the system, but states can opt in. As of December 2015, state and local law enforcement agencies from 7 states (Florida, Maryland, Maine, Michigan, New Mexico, Texas, and Arkansas) were using the system, and another 8 states wanted to become users. What photos are in the database? They’re primarily driver’s license photos, but they can also be mugshots or other photos from law enforcement. This isn’t the only database out there, though. The FBI can also search face recognition systems from the Departments of State and Defense and 16 states. Altogether, the FBI can search against more than 411 million photos as of December 2015. 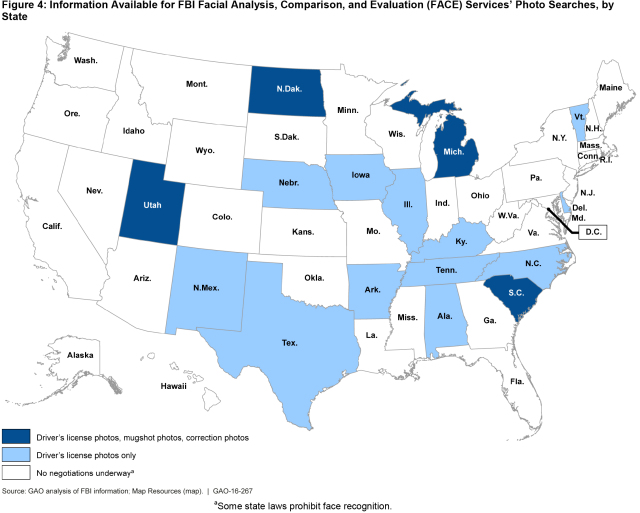 Questions about accuracy Yet, for all the photos and searching, it’s unclear how accurate the systems are. For example, the FBI’s system will return results with the correct match 86% of the time from a list of 50 potential matches. However, users can request lists as short as 2 potential matches—and the FBI has not tested the accuracy of those smaller lists. Moreover, the FBI’s accuracy tests were done in a very controlled environment. In the real world, criminals may try to hide their faces or turn away from cameras, and it’s unclear how accurate the FBI’s system is in cases like that. Privacy concerns Federal laws require agencies to conduct privacy impact assessments of new information systems that handle personal information and to publish notices that describe the uses of that information. However, we found that that the Department of Justice did not complete or update privacy impact assessments or publish required public notices in a timely manner. These are just a few of the issues we identified. To learn more about the accuracy of states’ and others’ systems, the number of searches run, and other details, check out the full report.
Read the post Markets—for example the housing market or those for commercial goods—currently rely on institutions...
Read the post