The floods devastating Louisiana will cause millions, if not billions, of dollars’ worth of damage. Homeowners who opted to purchase flood insurance coverage for their property may be able to rely on the National Flood Insurance Program for help. Today the WatchBlog looks at the nation’s flood insurance program and what might be needed to to keep it afloat.

After Hurricane Katrina in 2005, the National Flood Insurance Program had to borrow money from the Treasury to make ends meet. At that point, it became clear that the program didn’t generate enough revenue from premiums to cover long-term expected losses—one of the reasons we added it to our High Risk List. Meanwhile, by the end of 2014, the program had run up a $23-billion tab with the Treasury, and is likely to still need to borrow more in the future.

The ebb and flow of subsidies

Amid concerns about the program’s sustainability, however, Congress began phasing out some subsidies in 2012. The new, higher premiums better reflected the full risk of flood losses, but were burdensome to some property owners.

Later, concerns over these higher premiums led Congress to reinstate some of the subsidies through the Homeowner Flood Insurance Affordability Act in 2014. 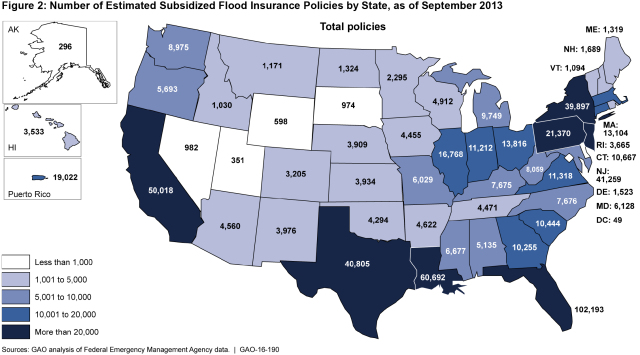 Ensuring that people can recover from a threat that could strike at any time, while limiting the burden on taxpayers, requires a financially sound insurance program.

We’ve previously suggested that Congress eliminate subsidized rates for the flood insurance program, and create and fund a direct subsidy for specific policyholders based on their ability to pay. This would reduce costs to taxpayers, address affordability concerns, and make the cost of the subsidies more transparent. But these options face some hurdles. For example, flood insurance subsidies are currently tied to properties, rather than policyholders and their ability to pay. Decoupling the subsidy from the property and attaching it to a policyholder or group of policyholders instead could better target the subsidy to those with affordability concerns.

Another way to address affordability would be to help certain policyholders mitigate the risk to their property by elevating or relocating a building, which would result in lower premium rates while reducing potential damage.

The Federal Emergency Management Agency, which administers the program, also doesn’t currently collect the data it needs to determine eligibility or estimate costs. We’ve spelled out the steps FEMA could take to ensure that the premium rates for flood insurance accurately reflect flood risk.

To learn more, check out our body of work on FEMA and flood insurance.