Skip to main content
The 2013 budget cuts known as “sequestration” were the first of their kind in more than two decades—and they’ll be with us for years. In fact, sequestration in some form is scheduled to continue annually through 2025, in the hopes of reducing the U.S. deficit by at least $1.2 trillion. Today’s WatchBlog takes a closer look at some of the sequestration cuts in fiscal year 2014, the second year of cuts, and how to measure progress toward that trillion-dollar deficit reduction goal. Sequestration and mandatory spending Sequestration is an across-the-board reduction in federal agency budgets. These cuts were triggered when action was not taken to reduce the federal deficit as required under the Budget Control Act of 2011. Sequestration has targeted both mandatory and discretionary spending programs. Mandatory spending includes entitlement programs like Medicare that aren’t funded in the regular annual appropriations process. Instead, these programs are funded based on things such as the number of people eligible for them and the programs’ benefit formulas. The government-wide budget for mandatory spending was estimated to be $2.9 trillion in fiscal year 2014. This figure has grown over the past 50 years as the nation’s population ages—and is projected to continue growing at least through fiscal year 2046. 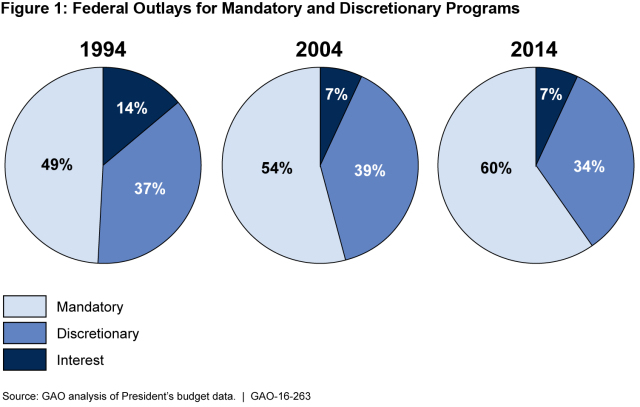 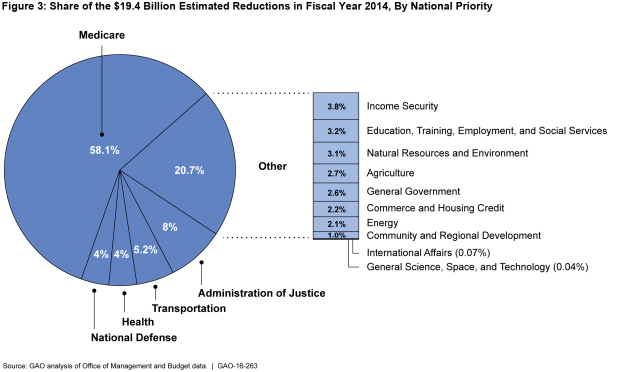 A drop in the bucket We found that sequestration cut less than 1% of the trillions of dollars in mandatory spending—or an estimated $19.4 billion. However, the actual amount reduced is unclear because the Office of Management and Budget doesn’t keep complete records in a way that allows it to calculate a year-end government-wide total. 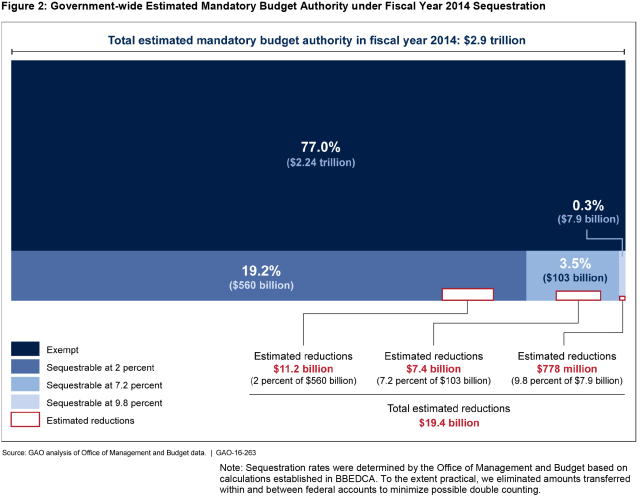 Getting out the yardstick Since OMB doesn’t know the actual amount that sequestration cut from the federal budget for mandatory spending, the nation lacks a clear picture of the true savings from sequestration each year. Moreover, without this information, the nation can’t track its annual progress toward the required overall savings of $1.2 trillion. We made 2 recommendations to OMB to help fill in these blanks. You can track the status of these and all of our unaddressed recommendations in our open recommendations database. And check out the full report for details of how reductions from sequestration affected 6 federal programs and the people they serve.
Read the post