Women’s history month is not only a time to celebrate women’s accomplishments, but also a time to reflect on their progress, particularly in positions of leadership.

In honor of International Women’s Day, today’s WatchBlog examines the representation of women on the boards of U.S. corporations.

Women make up almost half of the U.S. workforce, yet they occupy relatively few seats on the boards of publicly-traded companies in this country.

The good news, based on our research, is that women have been catching up in the boardroom. From 1997 through 2014, the number of women board directors doubled from about 8% to 16%.

The bad news is that, even if women started joining boards as often as men today, it could take more than 40 years for the number of women on corporate boards to equal the number of men.

So, what’s holding women back? It’s a combination of factors, including 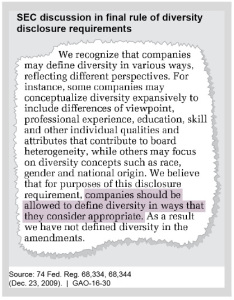 In the United States, the Securities and Exchange Commission requires publicly-traded companies to disclose whether and how they consider diversity in nominating board directors.

But SEC allows companies to define diversity. As a result, companies provide different types of information.

Several large public pension fund investors requested changes for diversity disclosure requirements. Specifically, they want SEC to require companies to disclose their directors’ gender, race, and ethnicity. The SEC is considering whether to make these and other changes.

To learn more about the SEC review, see strategies for increasing the number of women on corporate boards—including what some other countries are doing—and get insights into approaches CEOs, investors, and board directors prefer, check out our full report.