Navigating the federal budget can stump even the savviest of wonks. One of the things that complicates federal budgeting is the variety of ways the federal government collects money. Today’s WatchBlog examines one significant, if lesser known, source of federal revenue: user fees.

The government charges user fees for goods and services which generally have special benefits that are above and beyond what is normally provided to the public. For example, you may have paid a fee to enter a national park. Importers may pay fees for agricultural quarantine inspections. Or an inventor may pay for her patent application.

These fees add up: user fees amounted to more than $300 billion in fiscal year 2014, according to the President’s budget.

User fees are meant to promote fairness and economic efficiency by having those who benefit from particular government goods and services pay for them. Which is why, in some cases, user fees cover the entire cost of the activities.

However, when something benefits both a particular group and the general public, user fees may cover only a portion of the cost. For example, pharmaceutical manufacturers pay a fee for FDA to review their prescription drug applications. The fees cover part of the cost of the reviews, and general revenues cover the rest because the public also benefits from them. 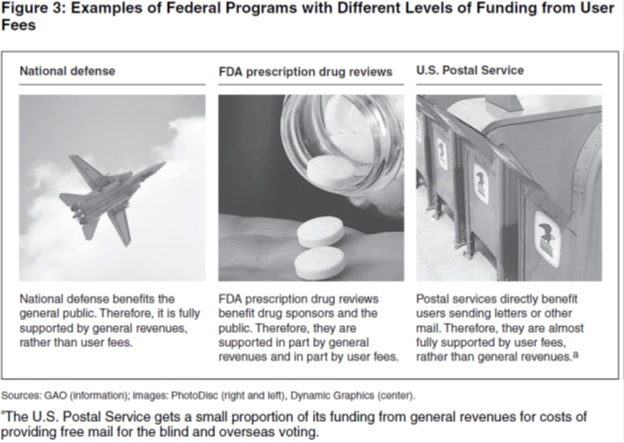 Bang for the buck

Well-designed user fees can help pay for programs while reducing taxpayer burden—but they also require thoughtful design. For example, if a fee doesn’t cover the entire cost of a program, how should the costs be split? To help policymakers with these and other questions, we issued a user fee design guide.

In September, we issued a report on regulatory user fees. These are fees businesses and individuals pay related to federal government regulations. For example, operators of a nuclear power plant may pay fees to the Nuclear Regulatory Commission to cover some costs associated with regulating the industry.

Our report addresses issues specific to regulatory user fees. For example, one issue with regulatory fees is whether an agency ever appears to act in ways that benefit a regulated business—rather than the public interest—because of the fees that business pays to the agency. In this case, one option is to separate the staff responsible for reviewing businesses from the staff who are collecting the fees.