Millions of Americans wake up knowing they must use some sort of public transportation during the day, whether for commuting, shopping, banking, getting to the doctor, or visiting friends and family.

But public transportation can be challenging for people with disabilities. The Americans with Disabilities Act (ADA) of 1990 required that certain public transit operators provide paratransit service—that is, accessible, origin-to-destination transportation, operating in response to requests from riders, as shown below. For the 25th Anniversary of the ADA, the WatchBlog checks up on ADA paratransit services.

According to a 2012 survey we conducted, ADA paratransit services are moving more people than ever before. Population growth, more people with disabilities living independently, and improved service are among the factors driving these increases.

But cost is a major challenge for providers of ADA paratransit services. Our survey results showed that, on average, the cost of providing an ADA paratransit trip was around $29, versus around $8 for fixed-route service, as shown below.

Moreover, the average paratransit fare of $2 is far below the average cost of providing the trip. This is because the ADA requirements for paratransit service limits the fare that may be charged. 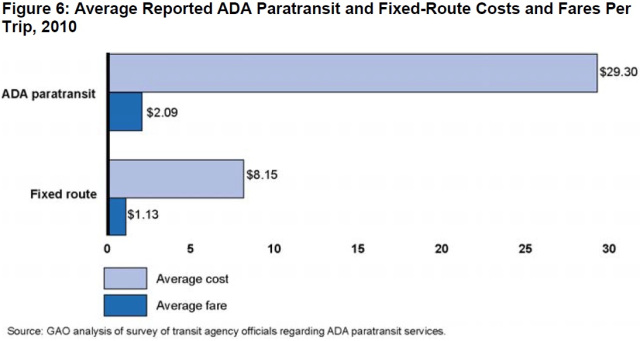 We found that transit agencies are taking a variety of actions to address both costs and increased demand. Some of these actions include coordinating with health and human services providers to improve ADA paratransit services or address the costs of providing such services.

Additionally, our survey results showed that some transit agencies have made accessibility improvements to their regular fixed-route systems since 2007 and are providing travel training to help riders transition to fixed-route services.

We will continue to monitor our recommendations related to paratransit to help ensure services keep rolling for another 25 years. Providing Services to Older Adults Isolated Due to COVID-19

Adults over the age of 60 may be more at risk of serious health issues as a result of the spread of...
Read the post

Despite what old movies may have led you to believe, eccentric aunts don’t usually slip arsenic into...
Read the post Down on the (Fish) Farm

Are you more surf than turf? Whether you call yourself a pescetarian or just enjoy the occasional...