In February 2015, the Federal Bureau of Prisons (BOP), a Department of Justice (DOJ) agency, housed about 210,000 inmates in 121 institutions—more than 8 times the inmate population in 1980.

Since fiscal year 2013, however, the number of federal inmates has declined by about 8,500, the first decline in decades. Despite this decline, BOP reports that its institutions remain about 30 percent overcrowded.

We recently reported on 3 DOJ initiatives to address ongoing federal incarceration challenges related to prison overcrowding, rising prison costs, and recidivism, and found weaknesses in how DOJ evaluated the success of each initiative:

Changes have also occurred for federal inmates reentering society. In 1984, parole was abolished for offenders convicted of federal crimes committed on or after November 1, 1987, and replaced with supervised release—a new form of post-incarceration community supervision. This change gave judges the authority to decide at the time of sentencing whether offenders would serve a set term of supervised release after serving a set term in prison. As shown in the figure below, it also resulted in a significant decline in federal offenders on or eligible for parole under the jurisdiction of the United States Parole Commission, an agency within DOJ that makes parole decisions for federal offenders. 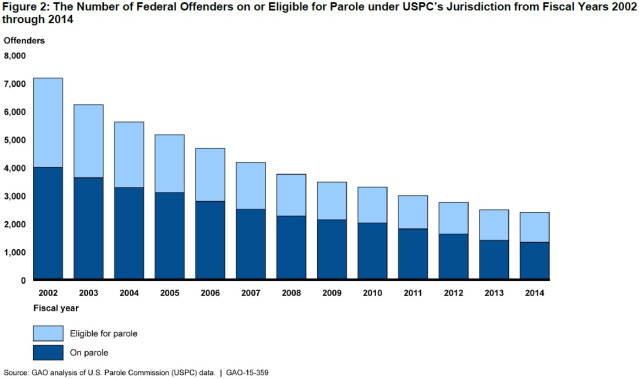 For more information, check out our Key Issues page on the federal prison system, as well as our recommendations to DOJ on how to improve federal prisons.