Six years ago, Air France Flight 447 (AF447) crashed into the Atlantic between Brazil and Senegal, and it took almost 2 years to retrieve the plane’s black box with the flight data. More recently, investigators found no trace of Malaysia Airlines Flight 370 (MH370), which disappeared en route to Beijing. These accidents raised questions about why authorities have difficulty locating state-of-the art passenger airplanes and recovering the flight data.

We recently issued a report on developments in aircraft tracking and flight data recovery. Listen to our podcast with Gerald Dillingham, Ph.D., our Physical Infrastructure team’s director for civil aviation issues, and read on to learn about these developments and proposals for improvements.

Determining the exact location of an aircraft in areas without radar coverage, such as oceanic airspace, can be difficult. For example, over the course of an oceanic flight, air traffic control units receive periodic reports from planes that indicate their position, but disruptions from weather or other conditions may make it difficult to determine the precise location between reports.

When a plane is lost, investigators try to recover its flight data and cockpit voice recorders—the “black boxes” shown below. These are about 20 pounds and roughly the size of a shoebox. Investigators analyze information from these recorders to determine the causes of aviation accidents. 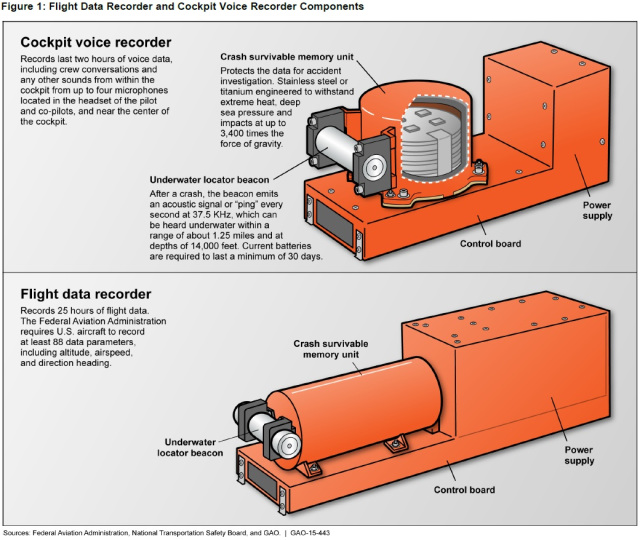 Although oceanic aviation accidents are rare, AF447 and MH370 highlight the difficulties investigators can face in underwater searches for airplanes’ black boxes.

One low-cost proposal to improve the chances of finding a plane’s black box is to increase the battery life of the underwater locator beacons in black boxes—from 30 to 90 days.

In the longer term, some options could eliminate underwater searches for black boxes: 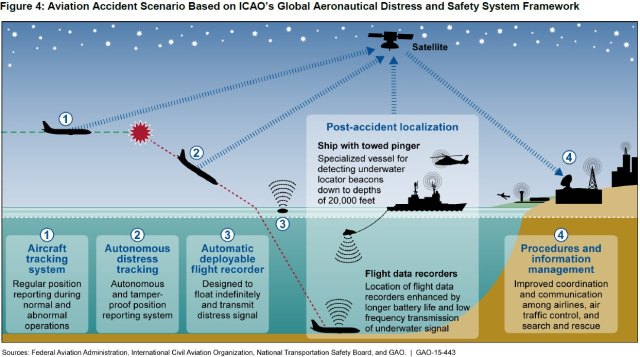