Skip to main content
Millions of American children and teens have been physically, verbally, relationally, or electronically bullied by their peers. Bullying can have harmful psychological, academic, and behavioral outcomes for victims. Because October is National Bullying Prevention Month, we wanted to highlight our report on school bullying and legal protections for vulnerable groups. Defining Bullying to Improve Research To determine the prevalence of bullying nationwide, officials from the Departments of Education and Health and Human Services told us that they would need a uniform definition of bullying. In our 2012 report, we found differences in definitions in 4 major federal research surveys used to study bullying. The Centers for Disease Control & Prevention and its research partners recently developed a uniform definition of bullying. We also found that while the surveys we reviewed collected some information about the demographic characteristics of bullied students, such as gender and race, they did not consistently collect information on characteristics such as sexual orientation or gender identity. This makes it difficult to determine the extent to which vulnerable demographic groups are being bullied. We recommended that the Departments of Education and Health and Human Services collect this type of information, and they have taken steps to do so. Challenges for Schools Dealing with Bullying School districts are adopting policies that prohibit bullying but are facing several challenges, including: Bullying and the Law When bullying rises to the level of discrimination, federal civil rights laws may cover individuals in legally-protected groups. Federal civil rights laws do not cover all children in all educational settings, and as a result, where a student goes to school could affect the student’s ability to file a federal discrimination claim. The table below highlights federal civil rights laws relevant to school bullying. 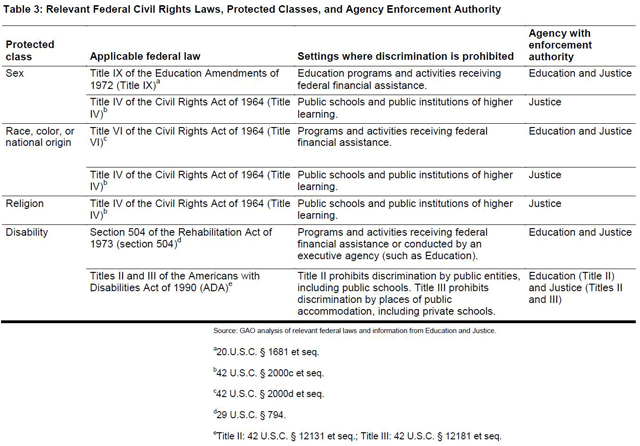 As with federal civil rights laws, states’ civil rights laws offer some protections, but some demographic groups may not always be covered. We recommended that the Department of Education compile information about state civil rights laws and procedures that relate to bullying, and inform complainants about state legal options. The Department’s Office for Civil Rights now informs people whose complaints are dismissed for lack of jurisdiction that they may have possible recourse under state or local laws.
Read the post