Back in January, for Tax Identity Theft Awareness Week, we identified the two major types of tax-related identity fraud: refund fraud, and employment fraud. Earlier this week, we released a new report on identity theft tax refund fraud. In the report, we examined IRS’s estimates about the extent of the problem and the need for information on the costs and benefits of options for combating it.

You can hear our podcast on this report below:

Refund fraud occurs when identity thieves use a stolen Social Security number and other identifying information to file for a tax refund. In this way, identity thieves take advantage of IRS’s “look-back” method of verifying tax returns. After doing some limited reviews, IRS issues a refund and then looks back later to make sure the tax refund claimed is the real thing. IRS usually issues refunds months before it matches wage information on tax returns with information employers reported on Form W-2, as shown in the figure. This “look-back” method helps IRS get refunds to taxpayers quickly, but it can also make the tax system vulnerable to refund fraud. 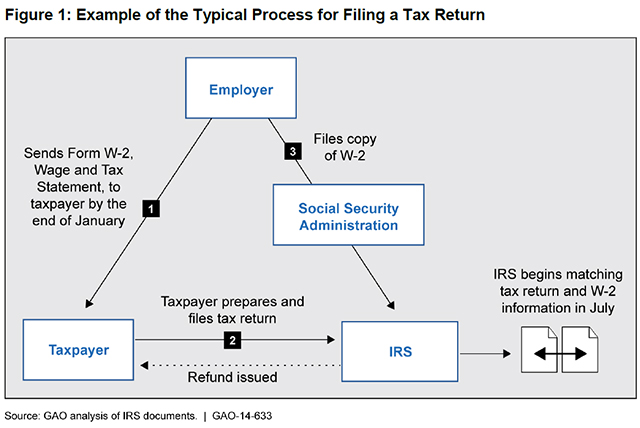 Although IRS has developed tools to combat identity theft refund fraud, identity thieves are learning and changing their tactics—which means IRS must respond with new ways to combat fraud. While there are no simple solutions, one option we discuss in our report is matching W-2 information to returns before issuing refunds. One or more of these other steps would have to be taken to make this happen:

We found that IRS had not yet assessed the costs and benefits of moving up W-2 deadlines or pre-refund matching. However, according to IRS, this strategy could potentially have prevented a substantial portion of the fraudulent refunds in the 2013 filing season.

A future report on this topic will cover other options to help combat identity theft refund fraud. Is FEMA Ready to Respond to Emergencies?

Even before COVID-19, a rising number of natural disasters has meant an increased reliance by state...