Skip to main content
School should be a stable environment for all students. In two recent reports, we looked at how states addressed federal legislation intended, in part, to increase school stability for children in foster care and those experiencing homelessness. We also highlighted student, school district, and child welfare agency challenges in minimizing school changes for these students. Educating Students in Foster Care Approximately 400,000 children were living in foster care in fiscal year 2012, and these children faced particular challenges in pursuing their education. Students in foster care are often unable to stay in the same schools, and some children we spoke with said they experienced frequent school changes, which negatively affected them. For example, new schools may not recognize credits they earned elsewhere, and students can find it emotionally difficult to rebuild support systems at the new schools. A 2008 law included provisions to address these school stability concerns for foster children, but we found that states have faced challenges implementing certain requirements of the law. 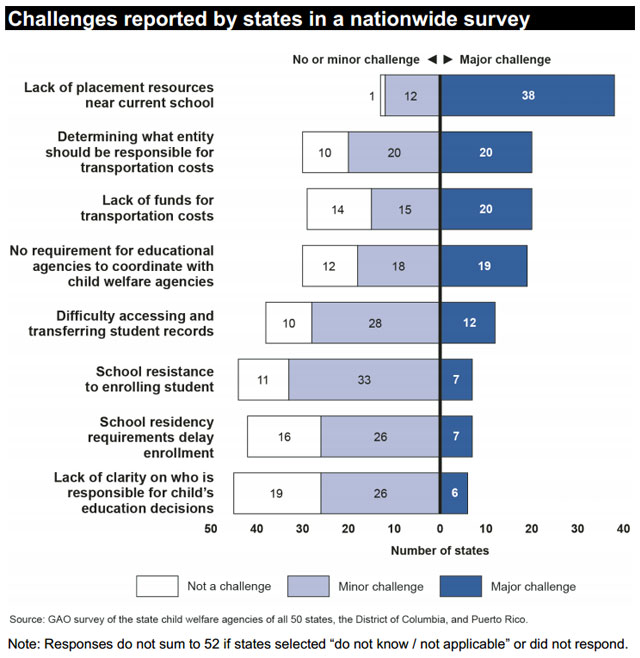 Education of Homeless Youth In the 2011-2012 school year, there were more than 1 million homeless students identified in the United States. We found that homeless students have a wide variety of academic and non-academic needs that can create barriers to school enrollment, attendance, and educational success. GAO director Kay Brown discussed some of these challenges and the steps that schools and the federal government are taking to address them in our podcast: 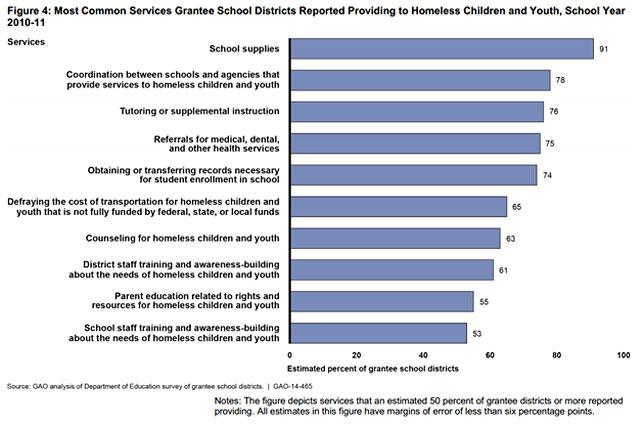 One key challenge for homeless children, like children in foster care, is the tendency to move frequently, increasing the chances that they will change schools. A provision in the McKinney-Vento Homeless Assistance Act, as amended, requires school districts to provide or arrange transportation for homeless students to and from the school they were attending before they moved. School districts we spoke with told us they provide transportation for homeless students through a variety of methods, such as: However, many school districts reported that the logistics of arranging transportation and the cost of providing it were challenging. One school district we spoke with reported spending $550,000 in one school year transporting homeless students. Despite these challenges, school stability remains an important step to educational success for foster and homeless children. Our reports provide recommendations that can aid in the implementation of federal provisions designed to improve the educational stability of foster and  homeless children nationwide.
Read the post In his recent State of the Union Address, President Biden emphasized the importance of investing in...
Read the post

When Vice President Kamala Harris was sworn in January 20, she became the first candidate elected to...
Read the post The death of George Floyd and other Black men and women has prompted demonstrations across the...