Here at GAO, we strive for accountability, integrity, and reliability in the work we do, but the way we do it evolves with time. As the month of July marks GAO's 93rd anniversary, we thought we would share a few snapshots of GAO’s office culture over the years.

Back in 1925, Comptroller General John Raymond McCarl cautioned GAO employees against “discussion of unofficial subjects, loud and unnecessary talking and boisterous conduct of any nature.” Our work environment at the time may have influenced this decision: accountants were seated in rows of desks in the soaring atrium of what is now the National Building Museum. Our current headquarters features more individual office spaces and conference rooms, which allow us to be a bit more boisterous about our findings without disturbing our colleagues.

GAO employees refraining from boisterous conduct, 1925 (Washington Monument just visible in the back left); and in the Great Hall of the Pension Building, GAO’s then-headquarters (now the National Building Museum), late 1920s[/caption]

Another memo from Comptroller General McCarl in 1929 set a high standard for the agency's work and attitude:

Generally it may be said that the spirit of the personnel of the General Accounting Office is that of friendly cooperation, initiative, alertness for the betterment of accounting or other conditions, in whatever byways or channels activities lead; devising, suggesting, and applying, whenever and wheresoever practicable, improved methods, systems,  procedures, and practices for the accomplishment of the maximum of results with the minimum of expenditure, and the perfecting and standardizing of the government accounting system as a whole.

We can guess from this 1961 photo that GAO employees were always professionally attired (but not particularly diverse). 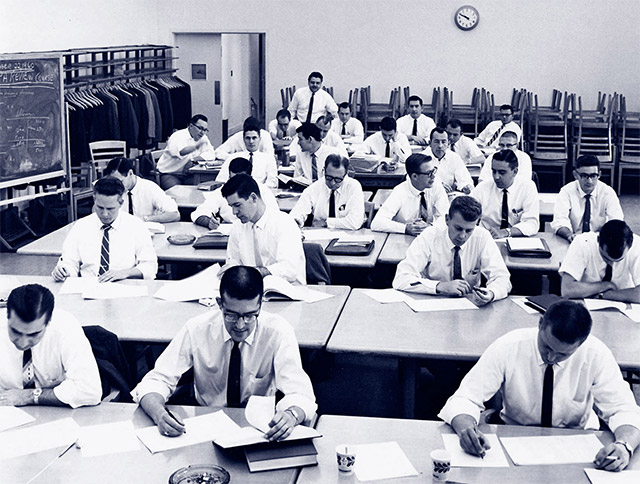 Not-so-sporty GAO auditors (as evidenced by the ties), 1961

By the end of the decade, GAO had to acknowledge some of the changing cultural norms. A 1967 GAO memo to new staff—Subject: Professional Bearing—stated that:

Although we do not discourage staff members from keeping up with the latest fashions, we believe that representatives of GAO should at all times be conscious of the impression he or she leaves with agency officials and that his or her appearance should be of a professional nature. In other words, sporty attire by the men and short dresses by the women should be held to a minimum.

93 years after our founding, many things have changed about the way we go about our work:

However, the spirit of CG McCarl’s 1929 memo still rings true. As we serve Congress and the American people, we still devise, suggest, and apply "improved methods, systems, procedures, and practices for the accomplishment of the maximum of results with the minimum of expenditure." Sunday marks the 75th Anniversary of the U.S. Air Force. Established by the Department of Defense on...
Read the post What do smartphones, automobiles, solar panels, and national defense programs all have in common...