Planning a vacation this winter? Each year, millions of people board cruise ships departing from U.S. ports. We have done work on the security and safety requirements for cruise vessels that may give you a better understanding of how cruise lines and U.S. agencies are supposed to protect you, the passenger.

One provision of the Cruise Vessel Security and Safety Act (CVSSA), enacted in 2010, required cruise lines with vessels that visit U.S. ports to report certain crimes that occur aboard their ships to the FBI and the U.S. Coast Guard. The U.S. Coast Guard maintains a website to publish information on the reported crimes that are no longer under investigation by the FBI. We found that the usefulness of some of the published data may be limited in three key ways:

We also found that some cruise lines are making efforts to improve reported crime data. In August 2013, several cruise lines began voluntarily disclosing alleged crime data on their websites. Also, in July 2013, legislation was introduced to amend the CVSSA that would revise and expand crime-reporting requirements, among other items. Since these efforts were new or in process, it was too early for us to assess their long term impact.

The January 2012 grounding of the cruise vessel Costa Concordia off the coast of Italy resulted in the deaths of 32 passengers, raising questions, for example, about the procedures for safeguarding passengers in emergency situations. For example, although international maritime law requires all passengers to be evacuated within 30 minutes of an order to abandon a vessel, the Italian government reported that the evacuation of the Costa Concordia took more than 6 hours. The Italian government investigated the accident and reported in May 2013 on numerous lapses in emergency procedures and management, including problems with vessel evacuation, voyage planning, and emergency communication.

In response to the Costa Concordia accident, the Cruise Lines International Association (CLIA)—which represents over 98 percent of cruise lines in the United States—initiated a safety review to come up with new safety measures. The review identified 10 safety-related policies in 2012 that all member cruise lines adopted by July 2013, as you can see in the figure.

Timeline of CLIA Actions Relative to the Costa Concordia Accident 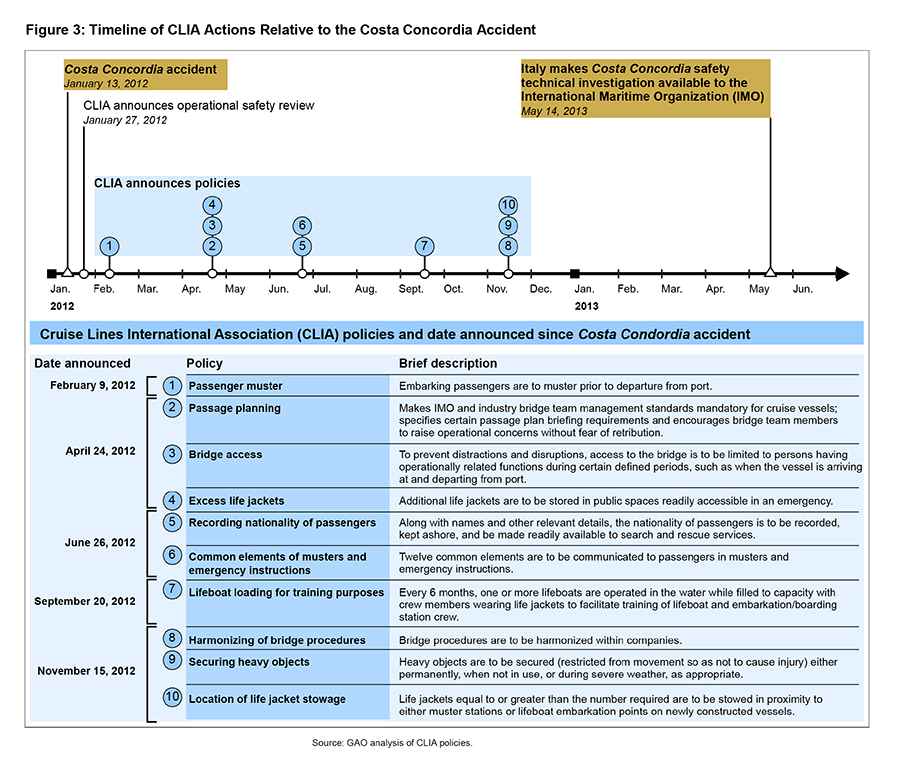 For example, one measure includes passengers doing their evacuation drills before the ship actually departs. Another includes additional life jackets that would be stored in public spaces so people would not have to go back to their cabins to get their life jackets if something happened suddenly. It is important to note at this point, though, that these are all being done voluntarily. The Coast Guard, so far, has not adopted any new regulations related to safety after the Costa Concordia accident.

For more information on cruise ship safety and security check out our report or listen to the podcast.